Turkey to make its own decision about coalition against ISIS 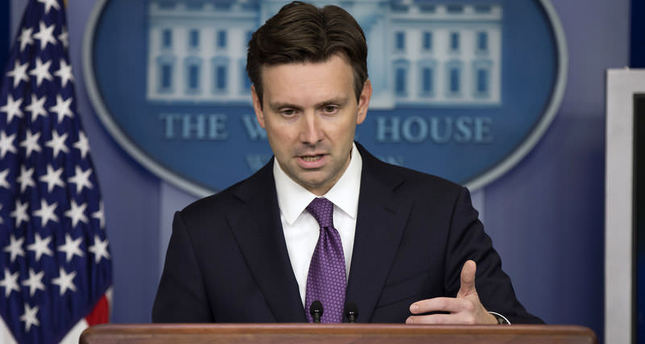 by AA Sep 12, 2014 12:00 am
Turkey's refraining from signing the Jeddah Communique that demonstrates a united stand against the threat of the self-proclaimed Islamic State of Iraq and al-Sham (ISIS) in the Middle East and the world, is a sign that the country is evaluating its role in the fight against the militant group, according to U.S. State Department Deputy spokesperson Marie Harf.

"They're (Turkey) an important counterterrorism partner. We'll continue to consult closely with them," Harf said. "Every country will make their own decisions in their own time and make their announcements."

Turkey has not given any indication as to why it refrained from signing the communique.

The foreign ministers of 12 states including Gulf Cooperation Council member states, the U.S., Egypt, Iraq, Jordan, and Turkey, met in the western Saudi Arabian city of Jeddah on Thursday to discuss the fight against the militants.

Responding to a question of whether the U.S. is concerned that the only member of NATO that was present at the meeting refused to go along, Harf said "We're not. We're constantly talking to them about counterterrorism, including the threat from ISIS."

White House Press Secretary Josh Earnes also touched on the issue and said that Turkey has a vested interest in the success of the strategy that U.S. President Barack Obama laid out to degrade and ultimately destroy ISIS.

Earnes noted that Sunni-led governments in the Middle East have a significant stake in fighting the terror group. He paraphrased Obama when he said that the terror group describes itself as Islamic State while is has nothing to do with the religion Islam.

"That is why you're seeing the intensive efforts of Secretary [of Defense Chuck] Hagel, Secretary [of State John] Kerry and even President Obama, who met with President [Recep Tayyip] Erdoğan on the sidelines of the NATO summit last week, to engage him in this effort and to ensure that the resources of these regional governments that do have a significant stake in the outcome are included in this broader international coalition," Earnest said.