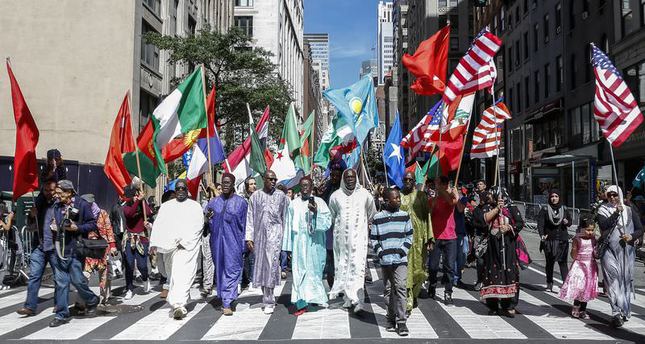 by Daily Sabah Sep 15, 2014 12:00 am
New York's prominent Madison Avenue staged on Sunday the 29th annual Muslim Day parade, organized by a large number of Muslims in the country. The organization took a start with prayers performed on the Avenue, which was converted to an outdoor mosque.

The Muslim immigrants living in the U.S. have represented their countries of origin with flags in the parade. Turkey was also represented in the parade with a small number of participants. The Turkish flag was carried by the chairman advisor of an American-Turkish association called Türk Hars and a retired fashion designer Şevkiye Sun who has been living in the U.S. for the last 42 years.

The first annual Muslim Day parade was held in New York City in 1985 and it has recurred resulary since then. In the early years, the parade's focus were floats depicting the Muslim holy places, however, in the last several years, the parades seem to have taken on a more political tone.

This year's parade raised concern over Muslim countries' problems all over the world through a theater performance thematizing U.S. President Obama, Israel PM Netanyahu, U.S. Foreign Minister Kerry, and Egypt President el-Sisi who came to power through a military coup. A symbolic Egyptian woman hanged also stroke the audience in the parade.

A group of Jews walking with the Muslims and carrying foreign currencies in the parade requested that embargo on Palestinian be lifted and asked for justice for Palestinians.

The second part of the parade underlined the actions of the self-proclaimed Islamic State of Iraq and al-Sham (ISIS) and emphasized that the militants' savagery could in no way be connected to Islam.