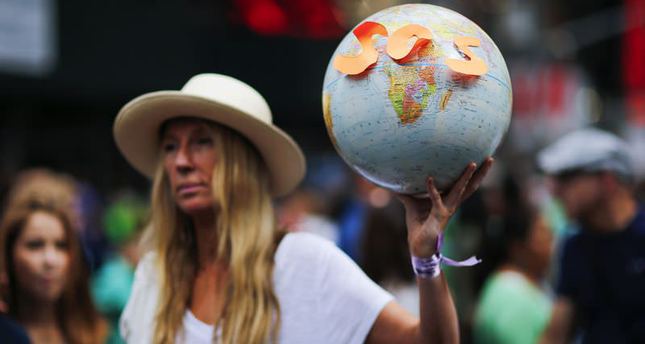 by Daily Sabah Sep 23, 2014 12:00 am
The UN headquarters in New York is hosting the largest gathering of world leaders, with more than 125 leaders attending, ever to address climate change on Tuesday.

The sixth Climate Week NYC, convened by the UN Secretary General Ban Ki-Moon, will take place from Sept. 22 to 28, and will generate momentum ahead of next year's convention on climate change in Paris.

The event will bring together business, government, civil society and the public across more than 140 events, panels, activities, exhibitions and workshops in New York, all set on driving the low carbon economy. The discussions will point out that the average global temperature rise must be kept below 2-degree Celsius by investing in cleaner energy.

Experts, however, are not expecting that a legally binding treaty that would require deep cuts in greenhouse gases will come out from the gathering, notably because the U.S. would not ratify one. The U.S. is the world's second largest source of greenhouse emissions, caused by the burning of fossil of fuels. China and India which are the world's first and third biggest emitters of greenhouse gas pollution would also balk at a binding agreement, the experts say.

Many nations, however, especially European countries and the island nations that already struggle with sea-level rise, are expected to demand a more ambitious agreement.