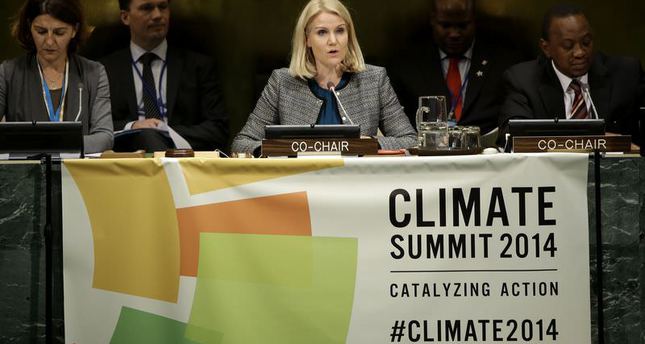 by reuters
Sep 24, 2014 12:00 am
The UN Climate Summit in NYC agreed on Tuesday to widen the use of renewable energy and raise billions of dollars in aid for developing countries in an effort to increase the prospects for a wide-ranging deal to slow global warming.

The one-day summit, hosted by U.N. Secretary-General Ban Ki-moon, set goals to halt losses of tropical forests by 2030, improve food production and hike the share of electric vehicles in cities to 30 percent of new vehicle sales by 2030.

The targets are meant to help prepare a 200-nation summit in Paris in late 2015 to finalize a deal to slow rising greenhouse gas emissions. Until now, work has been slow with many countries more focused on improving economic growth and creating jobs.

Governments and investors said they would raise more than $200 billion in climate financing by the end of 2015, including $30 billion in green bonds by commercial banks and $100 billion from a group of development banks.

"This will serve as a catalyst in finalizing a universal and meaningful agreement at Paris on climate change in 2015," Ban said of the cash.

The United Nations said in a statement that pledges of financial support would give a "significant boost" to a promise by rich nations in 2009 to raise $100 billion a year by 2020 from all sources to help poor countries shift to renewable energy and adapt to heatwaves, droughts and rising seas.

Separately, an alliance of about 30 countries including the United States and a coalition of multinational companies set a goal of halving losses of forests by 2020 and halting losses by 2030. If fully implemented, this would stave off between 4.5 billion and 8.8 billion tonnes of carbon dioxide emissions a year, equivalent to emissions by all the world's one billion cars.

Trees soak up carbon dioxide from the air as they grow and release it when they die. Burning of forests from the Amazon to the Congo, mainly to make way for farmland, accounts for up to a fifth of all greenhouse gases generated by human sources.

Companies including Walmart, Unilever, Wilmar International, General Mills, Asia Pulp and Paper and Nestle, many non-governmental organizations and indigenous peoples' groups signed up for the plan.

The declaration is backed by more than $1 billion from countries including Britain, Germany and Norway. Norway said it would provide up to $300 million to Peru and $150 million to Liberia.

"The actions agreed today will reduce poverty, enhance food security, improve the rule of law, secure the rights of indigenous peoples and benefit communities around the world," Ban said.

Among initiatives to curb the use of fossil fuel, one project would raise the share of renewable energy used in power generation in 19 countries in eastern and southern Africa to 40 percent by 2030 from 10 percent.

Another alliance of major nations and energy groups including ENI of Italy and Southwestern Energy in the United States signed up to do more to curb emissions of methane, a powerful greenhouse gas.

Companies including McDonald's and Kellogg committed to "climate-smart agriculture" to protect farmers from global warming and to improve crop yields to feed the world's rising population.