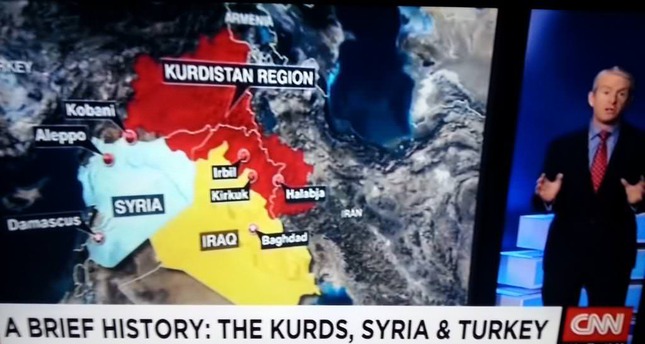 by AA Oct 10, 2014 12:00 am
American Turks have vowed to continue a protest campaign against CNN until they get an apology.

Members of the Turkish community in the United States said on Friday that they would keep writing letters and sending emails in protest of CNN's geographic blooper; On Wednesday CNN unfurled a map of Turkey which wrongly showed that half of the country was called "Kurdistan."

The Turkish community launched its campaign of protest on Thursday. CNN replied to the protests that day, saying that the map referred to the largely Kurdish-populated region on the border with Syria where the battle against the ISIS militants is taking place. But the map showed almost half of the country labeled as the non-existent Kurdistan.

We were expecting an apology and we are very disappointed with their answer, complained Ali Çınar, a representative of the Turkish American community. "Our struggle will continue until CNN apologizes," he insisted.

"The current borders of The Republic of Turkey were established by the Lausanne Treaty in 1923," one of the letters explained. "There has never been a Kurdistan state at any time."

ISIS launched an offensive in mid-September to take Syrian town of Kobani, which has a majority Kurdish population, near the Turkish border, and recently captured the outskirts of the town.

More than 180,000 Kurdish refugees have fled across the border to Turkey since ISIL attacked the region.