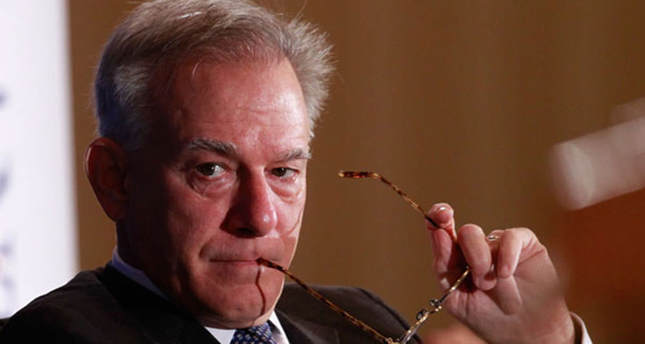 American writer David Ignatius agrees with Turkish government's stance on Syria that the opposition fighters should be trained for eradication of extremist groups in the region and for ousting of Assad regime.

David Ignatius, an associate editor and columnist for the Washington Post, said in his article published on Thursday, 'The problem with America's limited wars': "Turkey is basically right in arguing for a buffer zone in northern Syria, protected by some kind of no-fly zone. The United States should start by providing antiaircraft missiles to the CIA's vetted and trained Syrian opposition fighters."

He further added, "This would boost the rebels' popularity, in addition to stopping Bashar al-Assad's planes."

Ignatius criticizes America's cautious strategy in Syria --especially for dealing with ISIS--, saying "military history, since the days of the Romans, tells us that limited war is rarely unsuccessful."

He said in his article, Obama's "limited" but safe approach to wars in Syria and Iraq "opened the doors to the ISIS." Instead, Ignatius favors a more decisive stance in the region as adopted by the Turkish government.

Two Republican U.S. Senators, John McCain and Lindsey Graham, have also released a statement on Thursday saying they agree with Turkey's strategy on ISIS, claiming that the Bashar al-Assad regime in Syria must fall for the extremist group to be destroyed in the region.

The statement read, "President Erdoğan has said that we need an international strategy, not just to destroy ISIS, but also to force Assad to leave power and end the conflict in Syria – for the former objective cannot succeed without the latter. This strategy, Erdoğan has said, must include the establishment of safe zones in Syria for civilians and opposition forces, protected by no-fly zones – a strategy we have long advocated and continue to believe is vital to success in both Syria and Iraq."

The statement further added that U.S. President Barack Obama should adopt a strategy in line with the Turkish government's argument that indicates the solution to end the ongoing conflict in Syria can only be established through Assad leaving power.

"This view is shared by many of our friends and allies in the Middle East. We are confident that if President Obama adopted a strategy and took the steps that Turkish leaders are advocating to deal with Assad as well as ISIS, he would have significant support from our regional partners, including Turkish military involvement, which can be so important to success."