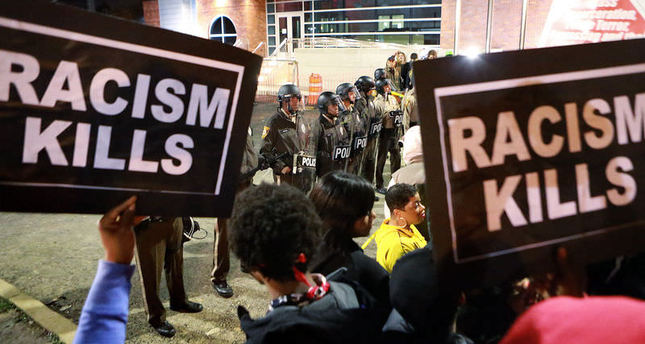 by Oct 13, 2014 12:00 am
Hundreds of civil rights activists and protesters applauded speakers, preachers and poets on Sunday in a an arena in St. Louis, Missouri, capping a weekend of protests against police violence that included 17 arrests earlier in the day.

Thousands of people staged protest marches, vigils and other demonstrations in the St. Louis area, calling for the arrest of a white police officer who shot dead an unarmed black teenager in August, with more protests scheduled for Monday.

Weeks of protests intensified this week after another black teen was shot dead by an off-duty policeman in the city.

Seventeen protesters were arrested early on Sunday at a spontaneous sit-in at the entrance to a convenience store in the Shaw neighborhood where Vonderrit Myers Jr, 18, was killed. Police said he had fired on security officers.

"Young people of conscience with cellphones of conscience took a local tragedy and turned it into a global call for justice," Cornell William Brooks, president of the National Association for the Advancement of Colored People (NAACP) told the crowd at the Chaifetz Arena on Sunday evening.

Hundreds of activists have traveled from Massachusetts, Virginia, New York, Louisiana and elsewhere to join the weekend protests and teach-ins.

Some people in the crowd turned their back on the NAACP speaker and then demanded to take the stage themselves to talk about their homegrown movement.

The most passionate response from the crowd came for young protesters who have become movement leaders in St Louis.

"I'm a young man living in an oppressed system trying to find my way out," said Tef Poe, who has been protesting since the day after Brown was killed. "I'm not an organizer. We're just real people who saw a problem."

Activist and intellectual Cornel West told the crowd he had not come to make a speech, but to participate in civil disobedience planned for Monday.

"I came here to go to jail," he said. Protest leaders did not say what type of civil disobedience had been planned.

Witnesses transmitting live video from the small overnight protest in Shaw, a neighborhood of St. Louis, showed a few dozen people sitting on the ground outside the convenience store and said some people were hit with pepper spray and what appeared to have been tear gas.

Police said they used pepper spray and not tear gas. St. Louis Police Chief Sam Dotson tweeted during the protest that protesters were throwing rocks at the police. But the protesters tweeted that they had not thrown anything.

The mother of Michael Brown, the 18-year-old shot dead on Aug. 9 by a white officer in Ferguson, Missouri, walked at the front of a rally on Saturday in the suburb of Ferguson.

Lesley McSpadden, who has criticized Ferguson police, has only rarely participated in protests. She eventually left the group, which grew to more than 1,000 people and moved on to Ferguson police headquarters.

Brown's death triggered a national uproar in August over police accountability and protesters have called for the arrest and prosecution of the officer, Darren Wilson. A grand jury is considering the case.

At the culmination of the Ferguson march on Saturday night, protesters shouted insults at a line of police in helmets and shields, with some demonstrators wearing bandanas or scarves over their faces. But there were no arrests or violence, a police spokesman said.

Earlier on Saturday, thousands of protesters in downtown St. Louis marched and rallied at a plaza, where organizers included Hands Up United, an activist group that emerged after Brown's death.

"This isn't going to stop until there is change with police and black youth," said Tory Russell, a founder of Hands Up United.