A second round is likely in Uruguay elections 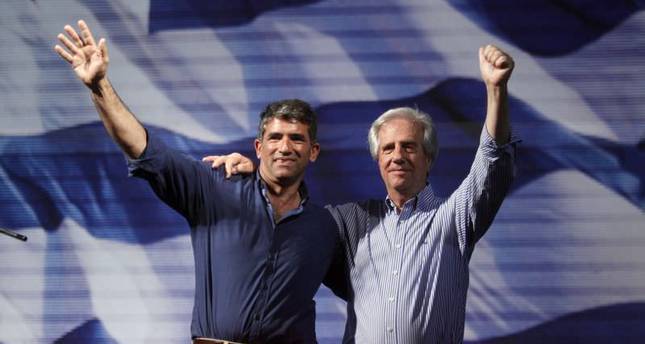 by AA Oct 27, 2014 12:00 am
Uruguay's Broad Front party is estimated to have received as much as 46 percent of Sunday's presidential vote according to exit polls, not enough to skirt a second-round runoff against the conservative National Party.

Polls by Cifra Gonzalo Raga & Asociados, Equipos Consultores and Factum show the candidate for the ruling leftist party, Tabare Vazquez, failed to get the 50.1 percent needed to avoid a second-round to be held Nov. 30.

Vazquez, a 74-year-old oncologist from working-class roots, will have to run against expected second-place finisher Luis Lacalle Pou of the National Party.

Lacalle Pou, a 41-year-old lawyer and congressman, received between 31 and 33 percent of the votes, while Pedro Bordaberry, the Colorado Party candidate, trailed with up to 15 percent, exit polls show.

A total of 2.6 million Uruguayans voted in a country with a population of 3.3 million, the second smallest in South America.

With a runoff, political analysts say Broad Front could face a tougher timeholding onto the presidency after a decade of rule, first by Vazquez, from 2005-10 and then Jose Mujica from 2010-15.

This is because Lacalle Pou could seek to negotiate support from Bordaberry to amass votes to pose a greater challenge to Vazquez.

While small, Uruguay has won the attention of foreign investors in everything from soybeans to paper mills and wind farms thanks to economic and legal stability.

Broad Front has cultivated this stability even while winning congressional support for progressive social reforms, including the legalization of abortions, gay marriage and the production and sale of marijuana.

While this has won Broad Front wide support, Lacalle Pou ran his campaign on the need for "fresh air."

The exit polls suggest that Broad Front will lose its majority in Congress if it wins the 2015-2020 presidency, making it harder to pass laws.

"What we are certain of is that there will be no majority in parliament," Luis Eduardo Gonzalez, director Cifra Gonzalo Raga & Asociados, said on TV broadcaster Teledoce.