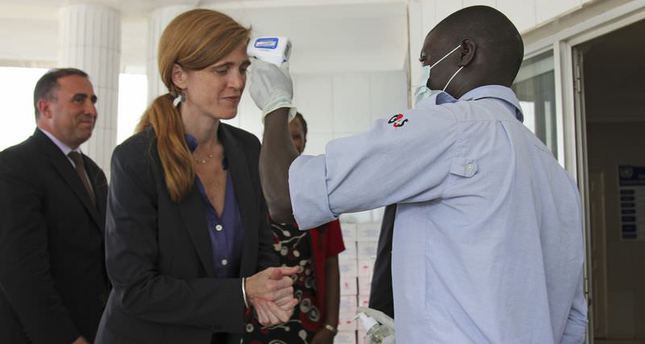 by Oct 27, 2014 12:00 am
The U.S. ambassador to the United Nations has criticized the level of international support for nations hit by Ebola as she begins a tour of West African nations at the epicenter of the deadly outbreak.

Samantha Power said before arriving in Guinea on Sunday that too many leaders were praising the efforts of countries like the United States and Britain to accelerate aid to the worst-affected nations, while doing little themselves.

"The international response to Ebola needs to be taken to a wholly different scale than it is right now," Power told NBC News.

She said many countries "are signing on to resolutions and praising the good work that the United States and the United Kingdom and others are doing, but they themselves haven't taken the responsibility yet to send docs, to send beds, to send the reasonable amount of money."

Besides Guinea, Power will travel to Sierra Leone and Liberia – the three nations that account for the vast majority of the 4,922 deaths from the Ebola epidemic.

More than 10,000 people have contracted the virus in West Africa, according to the latest World Health Organization figures.

Another country in the region, Mali, is scrambling to prevent a wider outbreak after a two-year-old girl died from her Ebola infection. She was Mali's first recorded case of the disease.

In the United States, an American nurse who was placed in quarantine after caring for Ebola sufferers in Sierra Leone has complained she was made to feel "like a criminal" upon arrival in New Jersey.

Kaci Hickox, who later tested negative, was the first person to be placed under mandatory 21-day quarantine for medical staff returning to parts of the U.S. who may have had contact with Ebola patients in West Africa.

The new rules took effect in the states of New York, New Jersey and Illinois on Friday, the same day Hickox returned.

She said she was being kept outside the main hospital building, with only a hospital bed, a non-flush chemical toilet, and no shower.

Late Sunday New York State eased its rules for how those arriving from Ebola-stricken West Africa must be treated, under pressure from the White House, where officials believe these rules could deter health workers from going to fight the epidemic.

New York Governor Andrew Cuomo said there would no longer be a blanket quarantine procedure from all people entering the state from affected countries in West Africa.

Instead, if someone arrives from an affected area with no symptoms, and without having had direct contact with people infected with the virus, no home confinement will be required. Health officials will monitor these travelers twice daily until the 21-day incubation period has expired.

President Barack Obama told Americans on Saturday they must be "guided by the facts, not fear" after a 33-year-old U.S. doctor returning from Africa became the first Ebola case in New York City.

Meanwhile, Australian authorities said early on Monday that a teenager who was in isolation in hospital had tested negative for Ebola after she developed a fever following her arrival from Guinea.

The 18-year-old, who arrived in Australia 12 days ago with eight other family members, had been in home quarantine in Brisbane before she developed a raised temperature.

Australia said Monday it was suspending migration from Ebola-hit West African nations to try to prevent the virus from crossing its borders, as a teenager who arrived from Guinea tested negative for the disease.

Immigration Minister Scott Morrison told parliament the government had stopped issuing visas to people from those countries hit by the disease, which has claimed close to 5,000 lives in its worst outbreak.

"These measures include temporarily suspending our immigration program, including our humanitarian program, from EVD (Ebola Virus Disease) affected countries," he said.

"This means we are not processing any applications from these affected countries," he added. People who had already been granted visas on humanitarian grounds would be able to travel to Australia, but would be subject to three separate health checks before departure as well as screening on arrival. But officials would cancel and refuse non-permanent or temporary visas for people who had not yet departed for Australia, the Australian minister said.