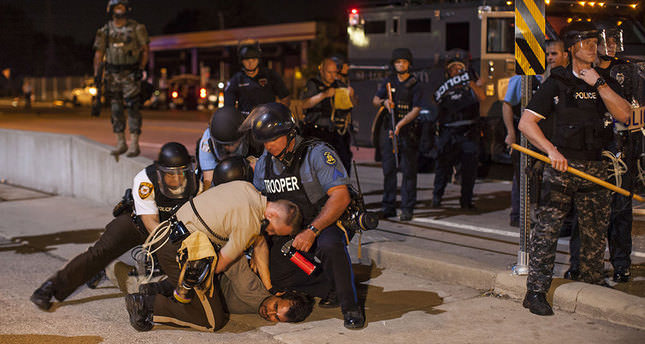 In the face of the excessive use of force by Ferguson police and the mistreatment of journalists and observers during protests in Ferguson, a lawsuit has been filed against the police by a Turkish journalist and a civil liberties group

The American Civil Liberties Union (ACLU) has filed a lawsuit against the St. Louis County Police on behalf of a Turkish journalist, Bilgin Şaşmaz, whose rights of free speech and freedom of the press were violated while covering protests in Ferguson, Missouri.

The lawsuit claims that "an unidentified St. Louis County police officer threw him to the ground, violently pushed his face and body into the pavement and handcuffed him," signalling the grave violation of freedom of press by excessive use of force by the St. Louis County Police.

Şaşmaz was beaten by police while covering the recurring protests in Ferguson and detained for more than five hours in a cell on August 17. During heavy clashes following the fatal shooting of an unarmed black teen by a white Ferguson police officer, Şaşmaz was at the scene of the protests. While trying to record a police officer, who was about to shoot a rubber bullet at one of the demonstrators, Şaşmaz claimed the police threatened to kill him if he did not stop taking photos of police shooting plastic bullets at protestors.

The freedom to report the news in Ferguson was violated during the largely peaceful demonstrations sparked by the fatal police shooting of an unarmed teenager, which turned the streets into a battle zone. The arrests and tear-gassing of journalists during the demonstrations revealed local police undermining the freedom of the press. Many journalists were kept away by the police or barred from entering the city after the violent clashes erupted.

Wesley Lowery, a Washington Post political reporter, and Ryan Reilly, a Huffington Post reporter, were arrested by Ferguson police. After long hours of detention, they were released. Other journalists were hit and teargased by Ferguson police outfitted in SWAT gear while covering the unrest. A camera crew from Al-Jazeera America said they were at shot with rubber bullets while they were recording the protests.

The killing of an unarmed teen, Michael Brown, 18, by police in the state of Missouri on August 9 caused intensified demonstrations against the police, as many angry African-Americans took to the streets, to protest the police shooting. The use of force by law enforcement officers and the policing of protests were investigated by a human rights delegation formed by the Amnesty International. The human rights organization released a new report on October 24 called, "On the Streets of America: Human Rights Abuses in Ferguson" documenting human rights concerns during the Ferguson protests in the wake of Brown's death.

Meanwhile, the Michael Brown case is now in the final stages as a grand jury decides whether the police officer Darren Wilson, who shot and killed Michael Brown, would face criminal charges. The parents of Brown took their case to the U.N. Committee against torture on Tuesday. The parents stated that the police shooting violated the principles of a U.N. convention on human rights.