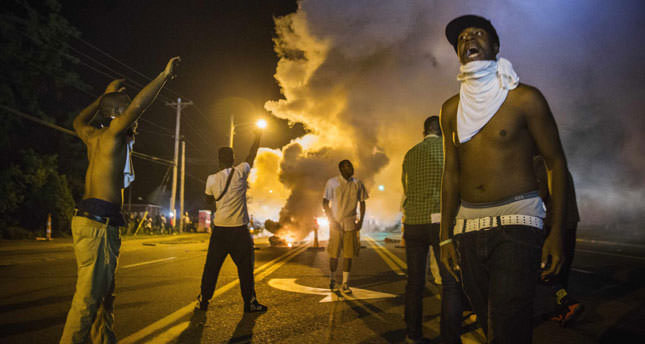 by Ragıp Soylu
Nov 27, 2014 12:00 am
Following a controversial verdict in the fatal police shooting case in the mid-western town of Ferguson, Missouri, hundreds of protestors and police turned the streets of Ferguson into a battle ground on Tuesday, as property is reported to be severely damaged in the restive town since the violence reignited.

As vandalism and sporadic gunfire prevailed in Ferguson, 44 people were reportedly arrested on Tuesday night in addition to 61 demonstrators who clashed with Ferguson police on Monday.

After the grand jury declined to indict a white police officer, 28-year-old Darren Wilson who fatally shot unarmed black teenager Michael Brown in August, public anger in the United States has spilled over with people disappointed with the grand jury's decision. The incident has sharply divided the country amid conflicting accounts of what happened on the night the unarmed young black American was shot dead by a white police officer.

Police officer Wilson testified to the grand jury saying that "I know if he reaches me, he kills me,", according to Reuters.

"The reason I have a clean conscience is because I know I did my job right," Darren Wilson said in an interview with ABC news, aired on Tuesday night, as he broke his silence over his shooting. "I fired a series of shots and paused," Wilson said. "I yelled, 'Stop, get on the ground,' giving him the opportunity to stop, and he ignored the command." Wilson also stated that he would have acted the same way if Brown had been a white teenager, stressing that there was no racist inclination in his act.

Missouri Governor Jay Nixon ordered additional National Guard troops to the area in an effort to prevent further violence that could continue to erupt in the restive town. However, the security measures that have taken place so far have not helped quell the chaos.

Speaking from the White House, U.S. President Barack Obama gave his remarks on the grand jury's verdict on Brown's case while underscoring "a deep distrust exist[ed] between law enforcement and communities of color." Obama also drew attention to "the legacy of racial discrimination in the U.S.," which is related to the Ferguson case and the subsequent violent protests.

Addressing U.S. citizens, he reiterated the immediate need for change in race issues in the U.S. society saying that, "We need to recognize that this is not just an issue for Ferguson, this is an issue for America. We have made enormous progress in race relations over the course of the past several decades. I have witnessed that in my own life. And to deny that progress I think is to deny America's capacity for change."

President Obama also rebuked protestors that turned the city into a battle ground during his speech in his home city of Chicago on Tuesday night. "The frustrations that we've seen are not about a particular incident. They have deep roots in many communities of color who have a sense that our laws are not always being enforced uniformly or fairly," Obama said.

"There are productive ways of responding and expressing those frustrations, and there are destructive ways of responding. Burning buildings, torching cars, destroying property are putting people at risk. That is destructive and there is no excuse for it. Those are criminal acts and people should be prosecuted if they engage in criminal acts," he added.

The predominantly black small town of Ferguson, Missouri encountered racially charged civil unrest after Michael Brown, an unarmed black teenager, was shot to death by a white police officer on Aug. 9. Since then, tension has remained high in the town while many people waited for police officer Wilson to face criminal charges.