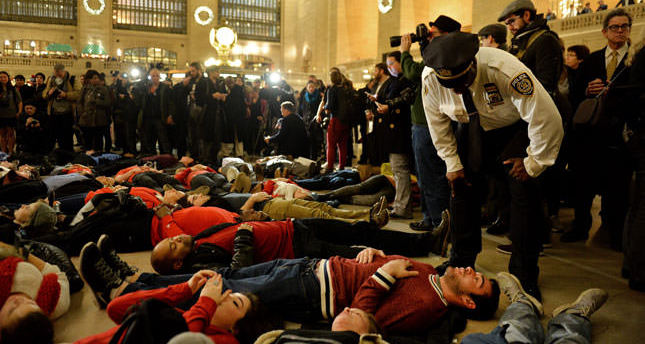 Following spiralling reporting of police violence, another black American fell victim to police brutality in the US. A police officer cleared of choking a black man to death leads many to question the U.S. justice system

The excessive use of force used by police in the U.S., and their violations of civil rights, has led to another death of an unarmed black American.

Despite black American citizens being the victims of police brutality, the U.S. justice system has yet to sentence the police officers. The white policeman responsible for the death of Eric Garner was not indicted by a grand jury decision.

This is the second grand jury decision in just over a week that declined to prosecute a white policeman over the death of an unarmed blackman.

Garner died after a New York policeman put him in a chokehold during an arrest. A New York grand jury decided on Wednesday not to charge a white police officer named Daniel Pantaleo, who applied the chokehold as police tried to arrest Garner in July 17 in the New York borough of Staten Island on suspicion of illegally selling cigarettes.

"Our prosecutors will conduct an independent, thorough, fair and expeditious investigation," the U.S. Attorney General Eric Holder told reporters, stating that a civil rights probe into the New York chokehold death would be launched.

"In addition to performing our own investigative work, the department will conduct a complete review of the material gathered during the local investigation."

Meanwhile, U.S. President Barack Obama said on Wednesday evening that the grand jury decision underscores the need to strengthen the trust and accountability between communities and law enforcement.

The investigation will look for potential civil rights investigations in the death of Eric Garner, 43, who was confronted by the officer on suspicion of selling loose, untaxed cigarettes.

A video shot by an onlooker showed Garner telling officers to leave him alone as they tried to arrest him and one then responded by wrapping his arm around Garner's neck in what appeared to be a chokehold.

It will be similar to a separate federal investigation already underway into the August 9 shooting death in Ferguson of Michael Brown, an unarmed black 18-year-old. After the long criminal inquiry into the police shooting of Michael Brown, the grand jury decided on November 24 not to indict the white police officer, Darren Wilson in the death of Michael Brown.

With many people disappointed with the jury's decision, public anger in the U.S. has led to violence, and has spread not only in other U.S. cities but received worldwide attention.

The Midwestern town of Ferguson was hit by violent unrest following the fatal police shooting of Michael Brown on August 9. Since then, unrest has been simmering in the violence-hit town even though a sense of normalcy has reportedly begun to settle in the city. In addition to Ferguson, the Ohio shooting further raised tensions. The Ohio police shooting of another young black American on November 17 further fuelled racial tension in the country.

In an effort to draw attention to police brutality toward the black community, hundreds of thousands have taken to the streets in protest. Many have called for the reform of police practices, especially towards black American citizens, a new police chief in Ferguson and a national law to prevent racial profiling by police during protests.

However, a new wave of anger erupted late Wednesday in New York after a grand jury decision not to indict the white New York City police officer responsible for the death of Eric Garner.

From Harlem to Times Square, from Union Square to the West Side highway, groups of several hundred protesters gathered and sometimes blocked traffic. They chanted or held up signs, saying "I can't breathe," the words Garner told the police while he was in a chokehold, according to a video of the arrest in July.

"No justice, no peace," the protesters chanted. "Protest this police, no racist police." During protests in New York City, 83 people were arrested, most for disorderly conduct, the New York Police Department reported on Thursday.