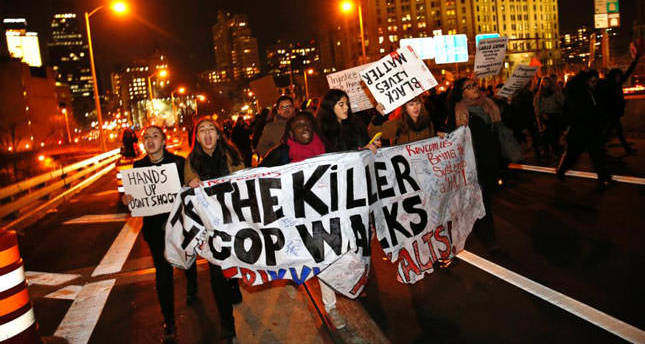 Thousands of demonstrators flooded the streets of New York for the second night after a grand jury decided not to indict Daniel Pantaleo, a white police officer, for the death of an unarmed 43-year-old black man, Eric Garner on Wednesday. "No justice, no peace, no racist police," screamed protesters on Thursday night. The event comes days after the recent chaos created by the well-known case in Ferguson, Missouri.

Garner, who suffered from asthma, was choked by police on July 17 earlier this year on Staten Island. A frequently-shown video shot by a bystander, shows the excessive force used by police as Garner was choked to death on the sidewalk, with three other officers helping to suppress him. "I can't breathe," he repeatedly says in the video—a quote that is now painted on signs and posters carried at rallies across the globe.

Pantaleo may still face disciplinary action from an internal police investigation. That investigation will probably focus on whether Pantaleo used a chokehold, which is a procedure that is banned by police department regulations.

The wave of rallies began when Michael Brown, an 18-year-old unarmed black teen from Missouri, was shot dead on August 9. Protests have been on-going since, but escalated in late November when prosecutor Robert Mucculloch announced that the grand jury would not indict Darren Wilson, the police officer that was responsible for Brown's death. U.S. Attorney General Eric Holder has mounted a civil rights review of the Missouri shooting and promises a full investigation of the New York case. The hope of families, protesters, civil leaders and activist is pinned on this federal examination.

As demonstrations continue, tensions were ratcheted further when another white police officer, who claims to have been feeling threatened, shot Rumain Bribson, 34, in Phoenix on Tuesday evening. Hundreds of protesters marched to the Phoenix Police headquarters.

Two witnesses told the officer, who is yet to be identified, that the others in the SUV with Bribson were selling drugs. "The officer gave the suspect several commands to get on the ground but he refused to comply, yelling profanities at the officer," the police department said in a statement
issued on Wednesday.

Similar to Brown's case, the statement said that there was a fear that Brisbon had a gun in his pocket, so the officer fired two rounds, striking Brisbon in the torso.

Consequent events cause a surge in the national conversation about police training, race equality and the process of the grand jury. The constant policing of black communities has caused the U.S police to lose the trust of minority groups.

The large protests in New York and Ferguson, Missouri, have underlined just how broad that gap in trust is, Philadelphia Police Commissioner Charles Ramsey said in an interview on Thursday.

"There is a tension, there are real issues," Ramsey said. "They feel that the police service they are getting is not fair and not impartial. They lost faith in us to a large extent, and we've got to restore that."

But the thousands of protestors don't want to hear words, they want to see action. Protests in New York last night remained peacefu, beginning in the evening and gathering people along the way, weaving between cars on the road. Angry protesters carried empty coffin replicas across the Brooklyn Bride, representing the deaths of the young men. While the protests have reached Minneapolis and Detroit, rallies to show support around the world have also been taking place in countries like England, China and Palestine.

There was some tension before midnight, as 3000 protesters united in New York's famous Times Square. The New York Police Department said 83 people were arrested mostly on disorderly conduct charges.

Protester Sharon Gordon, 52, of Matawan, New Jersey, said she hoped politicians would take notice. "There's been a confluence of social media and outrage," she said. "I do believe for the first time we're about to make a change."

Obama is proposing a three-year, $263 million spending package to increase use of cameras worn on the body , to expand training for law enforcement and add more resources for police department reform. According to Human Rights Watch's 2014 World Report, the U.S. has the largest population in prison in the world.

"Part of the reason this time will be different is because the president of the United States is deeply invested in making sure that this time is different," Obama said. "It violates my belief in what America can be, to hear young people feeling marginalized and distrustful even after they've done everything right."