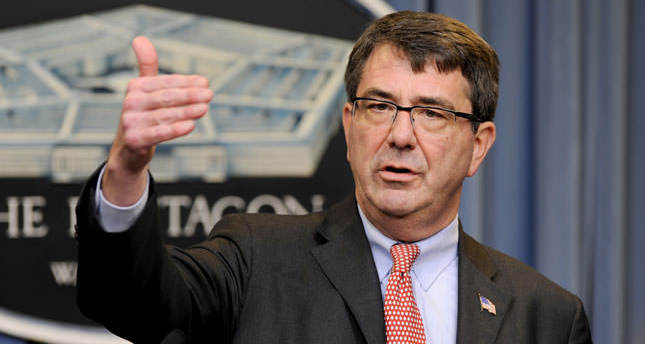 by Daily Sabah with Agencies Dec 06, 2014 12:00 am
U.S. President Barack Obama on Friday named a former high-ranking Pentagon official, Ashton Carter, as the next secretary of defence. Ashton Carter, a former deputy secretary of defense has long been considered as the top nominee to replace Defense Secretary Chuck Hagel. Carter's nomination has been expected for days but Obama held off on making a statement while the vetting of the former Pentagon official was being completed. Carter would, if confirmed by the Senate, be the fourth Pentagon chief of Obama's presidency, following Robert Gates, Leon Panetta and Hagel.

Michele Flournoy was among the main contenders to replace the former Defense Secretary Hagel. However, she took herself out of consideration for the Pentagon's top job.

President Obama has long been challenged through his coalition strategy to destroy the Islamic State of Iraq and al-Sham (ISIS), which has captured large swathes of territory in both Syria and Iraq. As there has been no solid progress made so far to get rid of the violent militant group, Obama's strategy against ISIS has faced severe criticism.

The former Defense Secretary Chuck Hagel was known for his critical position toward Obama's Syria policy as he favored the idea of removing Syrian President Bashar Assad, saying it should be the priority rather than eradicating ISIS.

Hagel said on Thursday his resignation last week was not prompted by "major differences" with President Obama, pushing back against statements that he had been fired or quit due to White House micromanagement. Hagel, speaking publicly for the first time about his Nov. 24 resignation, said he decided to step down after several conversations with the president led him to conclude that now was the best timing for a Pentagon leadership change.

"This was a mutual decision based on the discussions that we had," he said, noting that no aides had been present during their talks. "I don't think there's ever one overriding or defining decision in situations like this, unless there's some obvious issue, and there wasn't, between either one of us." The Pentagon chief, a Republican, has been in office since February 2013. He resigned in the aftermath of midterm elections that saw Obama's Democrats routed by Republicans, who now control both house of Congress.