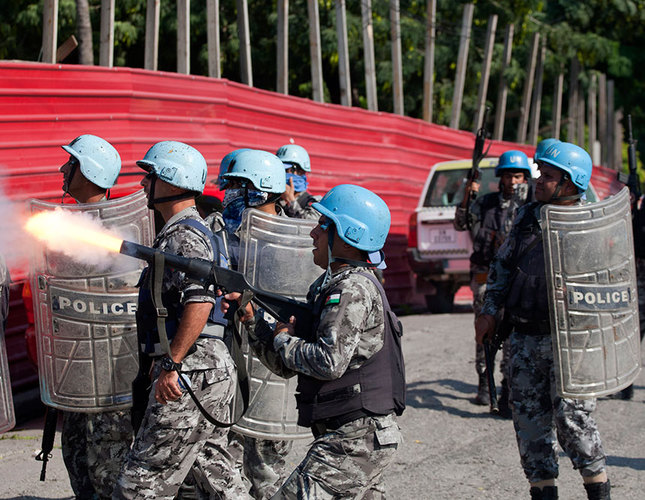 by Associated Press Dec 13, 2014 12:00 am
United Nations peacekeepers fired at a crowd of protesters on Friday, who were demanding new leadership just days after a government-appointed commission recommended that the country's prime minister resign.

Thousands of protesters marched through the capital, Port-au-Prince, as they burned tires and clashed with U.N. troops and police, who also fired tear gas. Associated Press journalists at the scene did not observe any injuries or deaths.

The protest occurred hours before President Michel Martelly's announcement that he accepts all the findings of a report this week from a government-appointed commission, including its recommendation that the prime minister resign.

Martelly said during a brief televised speech that Prime Minister Laurent Lamothe was prepared to make a sacrifice and resign, although he did not say that Lamothe would step down. Lamothe was at the announcement but did not speak.

Martelly was supposed to call elections in 2011 for a majority of Senate seats, the entire Chamber of Deputies and local offices. But he hasn't done so, and has filled numerous positions by appointment.

The Chamber of Deputies approved legislation in 2013 that would authorize elections. But six opposition senators have rejected the measure, saying it is unconstitutional and unfairly favors the government.

Administration officials have reiterated that the government wants to hold the elections. The terms of 10 senators expire in mid-January and Parliament will be dissolved, meaning Martelly would rule by decree.