Americans still upset America has done nothing yet 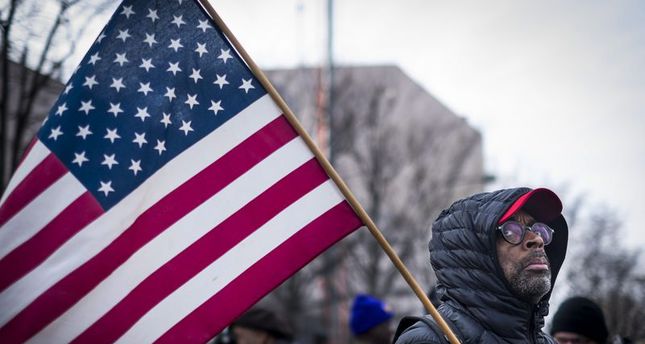 In light of recent grand jury decisions to not indict white officers for the killing of unarmed black men across the U.S., protestors are still fuming in demonstrations

Protests in the United States are not yet close to dying down. Thousands of protestors took to the streets on Saturday in Washington and New York to protest the seemingly constant killing of weaponless black men by police officers, police brutality and the grand jury process, urging leaders to take a strong stance on protecting the rights of black Americans. The decision of the grand jury to not indict the police officers responsible for killing Michael Brown in Missouri, Trayvon Martin in Florida and Eric Garner in New York have inspired protests across cities in the U.S. and around the world, including England, China and Palestine.

To add to the already appalling mix, police fatally shot Tamir Rice, a 12-year-old black American boy from Cleveland, last month while he was playing with his toy gun at a playground, labeling him the youngest victim of the recent four high-profile deaths. Thinking it was a real weapon, it took an officer "one-and-a-half to two seconds," after exiting his patrol car to fatally shoot the preteen, said Deputy Chief Edward Tomba, days after the shooting. Police have released a security video of Rice in the park before and during the shooting. Samaria Rice, the sixth grader's mother, allowed the footage of her son's death to be released so "the world knows" what happened to her son, according to a CNN interview with Anderson Cooper.

The officer, who shot Rice, Timothy Loehmann, was a rookie – he hadn't completed a year serving in the Cleveland police. His also-white partner, Frank Garmback, was driving the car.

Rice's death was ruled as a homicide, according to the autopsy report issued Friday by the Cuyahoga County Medical Examiner's Office. Medical Examiner Thomas P. Gilson wrote in the report: "It is my opinion that Tamir E. Rice, a 12-year-old black adolescent male, died as a result of a gunshot wound to the abdomen that injured his inferior vena cava, intestines and pelvis. The decedent was shot by law enforcement during a legal intervention."

The Rice case has angered an already angry crowd of protestors. Even though the family has filed a wrongful death lawsuit against the city and police, it is not certain they will win the case, as seen in similar cases in the last month. The lawsuit also claims that Rice lay on the ground for a few minutes before receiving any medical attention, which could have been crucial to saving his life. Protestors are insisting that the U.S. Congress allow federal prosecutors to take over cases involving police.

Cleveland's police force has been under a U.S. Department of Justice investigation for the past two years, which recently found in a report released on December 4 that the department often engages in unnecessary, excessive use of force.

The mothers of the four killed men and boys participated in an interview with CNN's Anderson Cooper about their children. They truly felt that had their sons been white, they would still be alive.

"It seems our kids are getting younger and younger," Sybrina Fulton, mother of Trayvon Martin, said, adding: "They're killing them younger and younger. There is no regard anymore for human life. There has to be somewhere where we draw the line and say, 'Listen, our kids want to grow up, too'."

Martin was a 17-year-old black teenager from Florida who was lethally shot by George Zimmerman, a neighborhood watch volunteer.

Zimmerman was charged and tried in Martin's death, but a grand jury acquitted him of second-degree murder and of manslaughter.

"We have to change mindsets," Fulton said. "We have to let people know that our children matter. Our sons and our daughters matter. We are hurting. This country is hurting," she said.