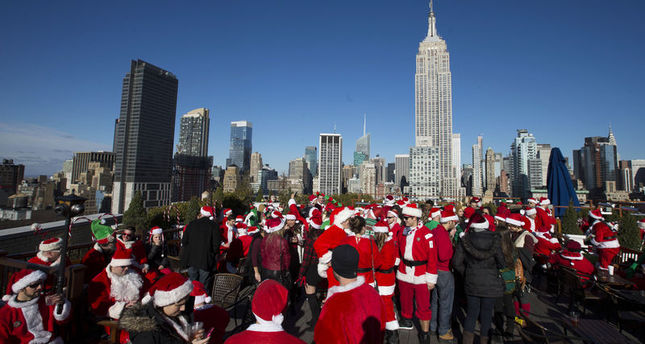 Thousands -- many young and a few old -- visited more than 30 Manhattan bars which opened their doors to a party slammed by critics last year after drunk merrymakers brawled, vomited and urinated in the streets.

But when one neighborhood in Brooklyn tried to ban this year's gathering, civil rights lawyer Norman Siegel played Santa to SantaCon, coming to the rescue to help redesign a festive, but law-abiding gathering.

To ease pressure on New York police, the organizers agreed to start early and restrict themselves to Midtown.

Revelers gathered in Times Square from 9:00 am, dressed as Santas, reindeers, elves and snowflakes, drapped in Christmas lights and tinsel. A few young men sipped beers hidden in paper bags.

Bellowing out Jingle Bells, they danced and hoisted each other onto one another's shoulders as women in stockings and suspenders, mini skirts and thigh-high stilettoed boots huddled in the cold.

"I make an exception sometimes!" said Riccardo of his early morning breakfast of beer. "It's the Christmas spirit. We're not going all day, but we'll try!" said Solorzano.

Despite one couple with a young child, many were students and those fresh out of college -- the demographic blamed last year for the rowdiness.

SantaCon organizers instructed participants to stick to bars that welcome them and party inside instead of on the streets.

"It's more important this year than ever to pace yourself, watch out for your elves and stay safe," the event's website warns, adding that bad behavior may mean no SantaCon next year.

"If we can have a parade next year and make it an annual event, that ideally in a few years families would come with their children and celebrate the holiday season, this city could use that," said Siegel.

"Maybe that's a dream that can be fulfilled or maybe it's just an illusion. But that's the challenge to try to make it happen."