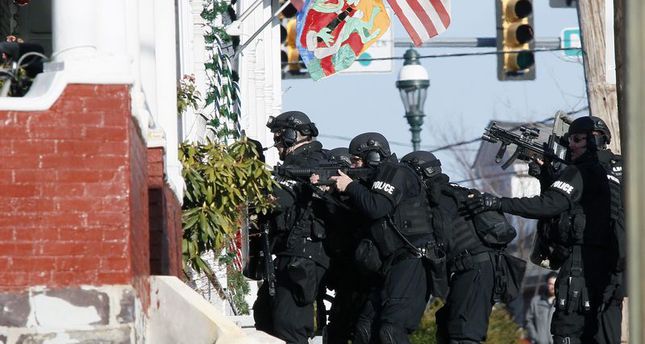 At least six people were killed and one other person was critically injured in a gun attack at three locations just outside of Philadelphia city Monday, authorities said.

The killing spree in Montgomery County sparked a manhunt that continued deep into the night, with police seeking the whereabouts of the suspect identified as Bradley William Stone, 35.

Stone, who is said to be an Iraq war veteran, fatally shot his ex-wife and five of her relatives in a shooting rampage that started at about 4 a.m. local time (GMT 09:00).

The Upper Perkiomen School District in the north of the county announced it would close all schools Tuesday because of the ongoing search for the suspect.

Officials said Stone was known to use a cane or walker, and that he might be wearing military fatigues, in either sand or green color.

The bodies of the victims were found at three locations in Souderton, Lansdale and Lower Salford Township during the day.

The manhunt was centered on a wooded area in the borough of Doylestown, 24.8 miles (40 kilometers) north of Philadelphia as of midnight, the ABC-affiliated local channel WPVI said.