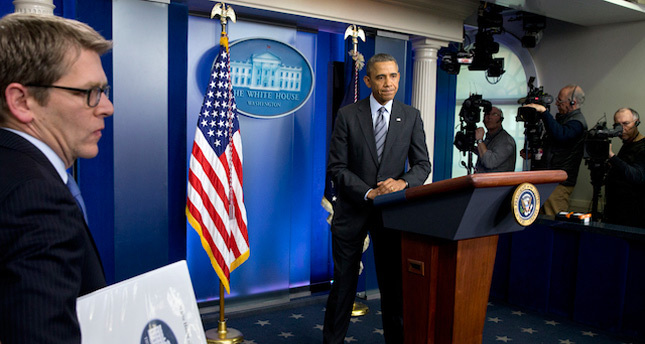 While U.S. President Barack Obama is expected to sign the Ukraine Freedom Support Act, there appears to be a discrepancy between U.S. State Secretary John Kerry's comments, and a White House announcement over the new round of hard-hitting sanctions on Russia.

Whether the U.S. will impose tough economic measures against Russia is of crucial importance at the moment. Even though President Obama will order tightened sanctions on Russia, Kerry's statement over the flexibility of sanctions demonstrates that not everyone in the U.S. administration wants to take a tough stance against Russia, further worsening the quickly deteriorating relationship between Washington and Moscow.

Another crucial point is that the U.S. is still unsure over its response to Russia's provocations in the crisis in eastern Ukraine, as its diplomatic efforts, together with the EU countries, have so far proven futile to halting Russian aggression.

Regarding U.S. concerns over "the spillover impact of Russia sanctions on American businesses, international energy markets, and the global economy," the U.S. legislation provides the flexibility "to waive the sanctions provisions as appropriate" if these sanctions contradict the national security interest of the country.

State Department spokeswoman Jen Psaki rejected the allegations of inconsistency between the statements made by Kerry and the White House over the congressional bill. "Russia has a choice. There are specific steps they can take to implement the Minsk protocols," she said.

In contrast to the White House's announcement that Obama intends to sign a bill imposing new Russian sanctions, Kerry said on Tuesday, speaking from London, "These sanctions could be lifted in a matter of weeks or days, depending on the choices that President Putin takes. Their sole purpose here is to restore the international norm with respect to behavior between nations," he added while urging Russia to make constructive moves in order to solve the ongoing crisis in Ukraine.

Spokesperson Psaki also stated that the U.S. would take new steps to better synchronize with European countries. "The Obama administration has worked together closely with allies and partners in Europe and internationally to build a broad coalition of countries to impose sanctions, as you all know, because we talk about it frequently here, that impose real costs on Russia for its aggressive actions in Ukraine," she stated in a daily press briefing released on Monday.

Meanwhile, the EU agreed to impose more sanctions on Russia through widening its ban on investment in Crimea, in an effort to target Russian Black Sea oil and gas exploration. "The European Union's foreign ministers agreed that new restrictions are to come into force by the end of the week. They will be endorsed by a written procedure by December 18," the Russian state-run news agency Itar-Tass reported Wednesday.

As tension still shimmers in the restive east of Ukraine, the West has condemned the increasing movement of Russian troops in the area to keep its influence over the separatists. The further Russian incursion into Ukrainian territory is seen as a violation of Ukraine's territorial integrity.

U.S. lawmakers passed a bill dubbed the Ukraine Freedom Support Act on Saturday. The bill covers further economic sanctions against Russia and the delivery of up to $350 million worth of U.S. military hardware including anti-tank weapons, ammunition and troop-operated surveillance drones to Ukraine. These sanctions would be expected to hit the defense and energy sectors of the Russian Federation. Russian producers, transferers, or brokers of defense articles are expected to be hit by the sanctions.

As the EU and the U.S. prepare to impose a new round of sanctions, the Russian economy is facing hard times, hit hard by the imposed sanctions due to the Russian annexation of Crimea and continuing support for separatists in the conflict-hit regions in eastern Ukraine. In an effort to impose stronger measures against Russia, in order to disrupt the Russian economy as a whole, some large Russian enterprises close to Russian President Vladimir Putin such as Novatek, Gazprombank and many others have already been the main targets for both EU and U.S. sanctions.

After the White House announcement over the Congress bill on sanctions imposed on Russia, Russian President Vladimir Putin stepped forward, urging his EU and Ukrainian counterparts to maintain peace talks under the September 5 Minsk protocol. The Russian President underscored the "necessity of a stable cease-fire" and "the importance of holding a meeting of the contact group as soon as possible in the interests of carrying out the Minsk pact," the Kremlin said in a statement, AFP reported. Istanbul / Daily Sabah