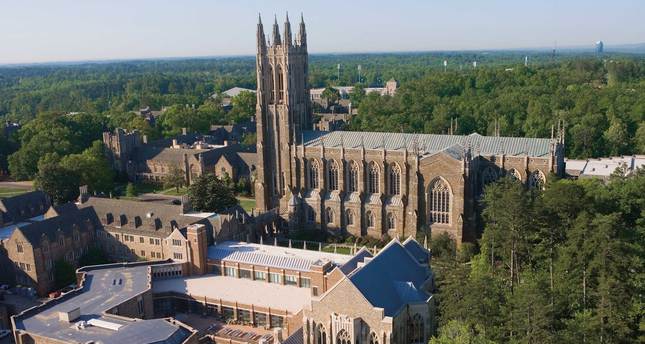 by Daily Sabah with AP Jan 15, 2015 12:00 am
Duke University has cancelled its plans to hold a weekly call-to-prayer chant for Muslims from the bell tower at its famous cathedral, the university administration announced on Thursday.

"Duke remains committed to fostering an inclusive, tolerant and welcoming campus for all of its students. However, it was clear that what was conceived as an effort to unify was not having the intended effect." said Michael Schoenfeld, vice president for public affairs and government relations.

Under the canceled plan, members of the school's Muslim Students Association would have recited the call lasting about three minutes from the bell tower.

However, the plan drew the ire of evangelist Franklin Graham, the son of the Rev. Billy Graham, who urged Duke alumni to withhold support because of violence against Christians that he attributed to Muslims. He wrote on Facebook that the decision is playing out as "Christianity is being excluded from the public square."

The private university in Durham, northwest of Raleigh, was founded by Methodists and Quakers, and its divinity school has historically been connected to the United Methodist Church. It has nearly 15,000 students, including about 6,500 undergraduates. The school's insignia features the Christian cross and a Latin motto translated as "learning and faith."

The university says it has more than 700 students who identify themselves as Muslim, and it hired its first full-time Muslim chaplain in 2009. Muslim students have been holding prayer services in the basement of the chapel for the past two years.
Last Update: Jan 16, 2015 10:12 am
RELATED TOPICS