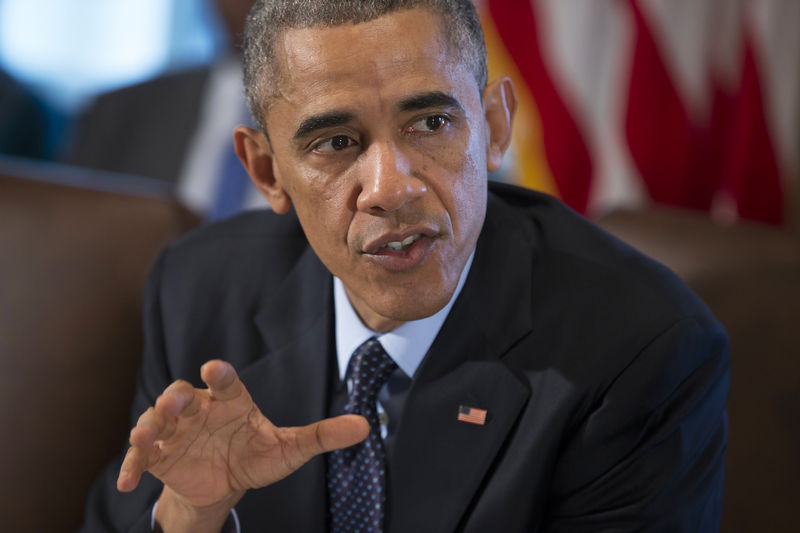 by Compiled from Wire Services Mar 04, 2015 12:00 am
An email suggesting that Barack Obama would not last long – because "what black man holds a steady job for four years" – is among racist emails unearthed in a federal civil rights investigation into the police department of Ferguson, Missouri.

According to multiple accounts of a US Justice Department report, which is expected to be released as early as on Wednesday, federal agents revealed at least two municipal Ferguson emails containing racist language.

Besides the racist Obama email, another message written by a Ferguson official in May 2011 stated: "An African American woman in New Orleans was admitted into the hospital for a pregnancy termination. Two weeks later she received a check for $5,000. She phoned the hospital to ask who it was from. The hospital said, 'Crimestoppers.'" The authors of the emails were not identified.

The findings might be used by the government to investigate Ferguson officials and maybe even sue the city.

The report marks the culmination of a months-long investigation into a police department that federal officials have described as troubled and that commanded widespread attention after one of its officers shot and killed an unarmed black man, 18-year-old Michael Brown, last summer. The white police officer who shot him was not indicted by a grand jury, a decision that prompted violent street protests.

It chronicles discriminatory practices across the city's criminal justice system, detailing problems from initial encounters with patrol officers to treatment in the municipal court and jail.

The Justice Department investigation found that black motorists from 2012 to 2014 were more than twice as likely to be stopped and searched as whites, even though they were less likely to be found carrying contraband, according to a summary of the findings.

The review also found that blacks were 68 percent less likely than others to have their cases dismissed by a municipal court judge. And from April to September of last year, 95 percent of people kept at the city jail for more than two days were black, it found. Of the cases in which the police department documented the use of force, 88 percent involved blacks.

The officials spoke on condition of anonymity because they were not authorized to speak publicly before the report is made public.

The city of Ferguson released a statement acknowledging that Justice Department officials supplied a copy of the report to the mayor, city manager, police chief and city attorney during a private meeting Tuesday in downtown St. Louis. The statement offered no details about the report, which the city said it was reviewing and would discuss Wednesday after the Justice Department makes it public.

The Justice Department began the civil rights investigation following the August killing of Brown, which set off weeks of protests. A separate report to be issued soon is expected to clear the officer, Darren Wilson, of federal civil rights charges.

The report provides direct evidence of racial bias among police officers and court workers, and details a criminal justice system that through the issuance of petty citations for infractions such as walking in the middle of the street, prioritizes generating revenue from fines over public safety.

The practice hits poor people especially hard, sometimes leading to jail time when they can't pay, the report says, and has contributed to a cynicism about the police on the part of citizens.