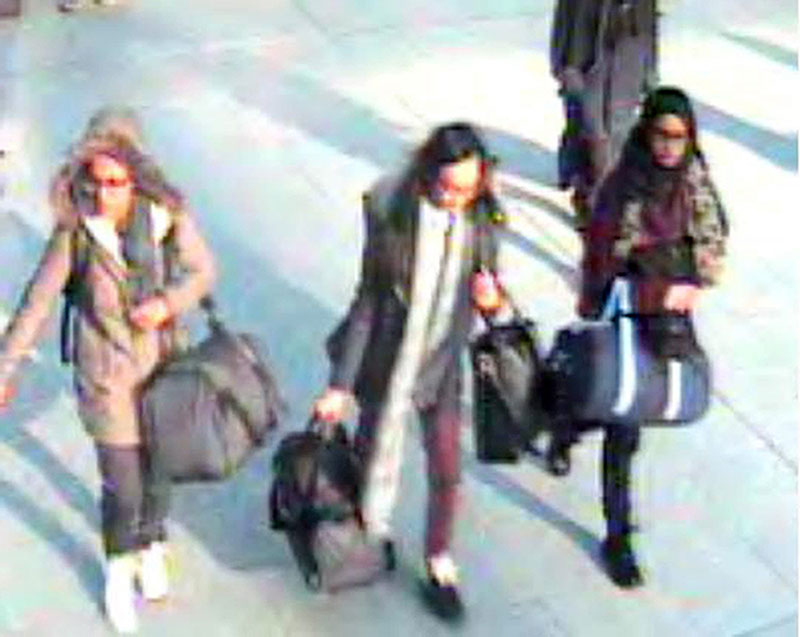 by Mar 11, 2015 12:00 am
Three London schoolgirls who fled to Syria are believed to have stolen family jewellery to fund their travel, police said Tuesday as the trio's relatives expressed disbelief at their actions.

Schoolfriends Kadiza Sultana, 16, and 15-year-olds Shamima Begum and Amira Abase, left their homes last month and flew to Istanbul, from where they are believed to have joined the self-proclaimed Islamic State of Iraq and al-Sham (ISIS) in Syria.

However, family members later said that the girls must have found additional funds elsewhere, as the jewellery that was missing was not of great value.

"I feel there is someone out there helping in terms of funding because there's no way my sister has got the cash to fund herself," said Kadiza's sister Halima Khanom.

"I really hope the police would now make it their business to establish where these funds came from because it clearly wasn't from home," added Kadiza's cousin Fahmida Aziz.

The girls are among 26 British young women who have gone to join ISIS militants in Syria, according to Rowley, who is assistant commissioner of London's Metropolitan Police.

But he said that so far "we have no evidence to suggest they are involved in terrorism", and they could return home to Britain without facing charges.

Earlier, Abase's father Hussen Abase told the committee that his daughter was a victim - adding that he believed she had been "terrified" by police attention following the flight of another schoolfriend to Syria in December.

Police spoke with Sultana, Begum and Abase and four other girls from the same London school after the 15-year-old girl went missing in December, and gave them a letter requesting further permission from their parents to talk to them.

None of the trio passed on the letters, and their relatives have complained that they could have acted to stop the girls going to Syria if they had known the situation.

Abase said of his daughter: "She is the kind of girl who, if it (is) sunset, will call me to pick her up. So how on Earth (can) she travel to abroad and to join ISIS? The letter terrified my daughter."

He added that the family was "mentally disabled" by her loss, saying: "We focus on our children to come back home, not in prison, because they are victims."

In her evidence to the committee, Begum's older sister Sahima also said there was no indication that the younger girl had been radicalised.

"My sister was into normal teenage things. She used to watch 'Keeping Up With The Kardashians'," she told lawmakers.

Metropolitan Police Commissioner Bernard Hogan-Howe said he was sorry if the families felt let down by the police, and acknowledged officers had failed to get the letters through to the parents that could have alerted them to the risk.

But he told the committee: "I don't think we would go as far as saying therefore that caused the girls to go. There was nothing more we could have done to prevent that."