Plane carrying NCAA basketball players crashes, killing everyone on board 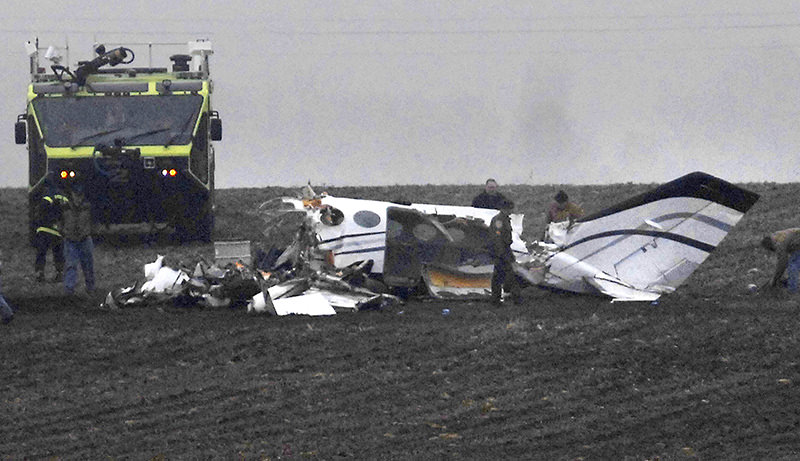 | AP Photo
by Associated Press Apr 08, 2015 12:00 am
A private plane returning from the NCAA basketball tournament in Indianapolis crashed in a central Illinois field on Tuesday, killing all seven people on board, including Illinois State University's associate head basketball coach and a deputy athletics director.

Rescue personnel found no survivors at the site near the city of Bloomington, and a coroner pronounced the seven occupants dead, McLean County Sheriff Jon Sandage said at a news conference. The plane went down in a soybean field 2.5 miles (four kilometers) from the Bloomington airport. All the victims, who were found strapped in their seats, died from blunt force trauma resulting from the crash, said Coroner Kathleen Davis.

Illinois State University President Larry Dietz confirmed in an email to students, faculty and staff that associate head basketball coach Torrey Ward, 36, and Aaron Leetch, 37, the athletic department's deputy director for external relations, were killed in the early-morning crash. The email was released to media.

"Words cannot fully express the grief that is felt in the wake of such a tragedy," Dietz wrote, adding that both men were well-respected and much-loved in the athletics department. "We move between shock and profound sadness."

Several players and staff carried on with an optional practice Tuesday afternoon at Redbird Arena. A spokesman said they would not make players or coaches available for comment.

The Cessna 414 twin-engine aircraft took off from Indianapolis and crashed just short of the Central Illinois Regional Airport in Bloomington after midnight, the Federal Aviation Administration said.

The National Transportation Safety Board was investigating, but there was no initial word on the cause of the crash. News photos from near the scene showed dense fog.

The airport was open and all systems, including its runway lighting, were functioning, though the tower had closed several hours earlier and handed responsibility to an air traffic control facility in Peoria.

Radar contact was lost moments before the crash and a search was launched when the pilot failed to close out his flight plan. It took about three hours to find the wreckage.