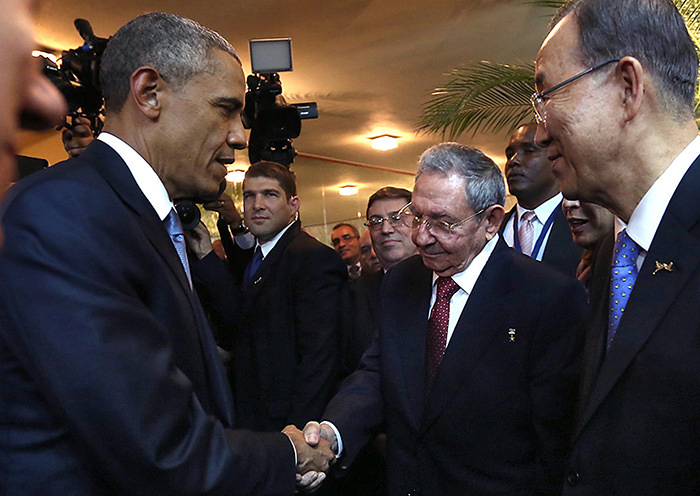 A photograph showed Obama and Castro, both wearing dark suits, chatting in a small group of leaders at the summit's opening ceremony. A White House official confirmed the two men shook hands and spoke briefly.

US President Barack Obama told a summit of Latin and North American leaders on Saturday that his Cuba policy shift marks a "turning point" for the region.

Addressing the Summit of the Americas in Panama City, which Cuban President Raul Castro was attending for the first time, Obama said: "This shift in US policy represents a turning point for our entire region."

"The fact that President Castro and I are both sitting here today marks a historic occasion," he said.

But the US leader acknowledged that the two countries, as they negotiate to restore diplomatic relations that broke in 1961, will continue to have disagreements.

"I think it's no secret, President Castro I'm sure would agree, that there will continue to be significant differences between our two countries," he said.

"In my opinion, President Obama is an honest man," Castro said in a remarkable vote of confidence from the Cuban leader, who praised Obama's life and his "humble background."

Turning the page on the longstanding U.S. policy of isolation, Castro and Obama were expected to meet later on Saturday on the sidelines of the Summit of the Americas the first substantial meeting between a U.S. and Cuban president in more than five decades.

The flurry of diplomacy, which kicked off on Friday evening with an historic handshake between Obama and Castro, was aimed at injecting fresh momentum into their months-old plan to restore normal relations between their countries.

"The Cold War has been over for a long time," Obama said. "And frankly I'm not interested in having battles that started before I was born."

Castro, in a meandering, nearly hour-long speech to the summit, ran through an exhaustive history of perceived Cuban grievances against the U.S. dating back more than a century in a vivid display of how raw passions remain over American attempts to undermine Cuba's government.

Then, in an abrupt about face, he apologized for letting his emotions get the best of him. He said many U.S. presidents were at fault for that troubled history but that Obama isn't one of them.

"I have told President Obama that I get very emotional talking about the revolution," Castro said through a translator, noting that Obama wasn't even born when the U.S. began sanctioning the island nation. "I apologize to him because President Obama had no responsibility for this."

Speaking just before Castro, Obama acknowledged that deep differences between their countries would persist. Yet he said he was uninterested in getting bogged down in ideology, instead casting the thaw in relations as an opening to create "more opportunities and resources for the Cuban people."

"The United States will not be imprisoned by the past," Obama said. "We're looking to the future."

The last known meeting between sitting U.S. and Cuban leaders was in 1958 between Dwight Eisenhower and Fulgencio Batista, which was coincidentally also in Panama. The next year, Fidel Castro met with Richard Nixon, who was vice president at the time.

The optimistic tone from Obama wasn't enough to offset the skepticism of some Latin American leaders about U.S. intentions in the region, including many who have sharply criticized recent U.S. sanctions against Venezuelan officials.

Even President Dilma Rousseff of Brazil, whose country is a close U.S. partner, told the summit that such unilateral policies of isolation are always counterproductive and ineffective. "For that reason we reject the adoption of sanctions against Venezuela," she said.

Raising the stakes even higher for the two leaders was mounting speculation that Obama would use the occasion of the summit taking place in Panama to announce his decision to remove Cuba from the U.S. list of state sponsors of terrorism, a gesture that for Cuba holds both practical and symbolic value.

The U.S. long ago stopped accusing Cuba of conducting terrorism, and Obama has signaled that he's ready to take Cuba off the list. Earlier in the week he suggested an announcement was imminent when he revealed that the State Department had completed its lengthy review of the designation.

Removal from the terror list is a top priority for Castro because it would not only purge a stain on Cuba's pride, but also ease its ability to conduct simple financial transactions. Castro said Cuba should never have been on the list in the first place.

"Yes, we have conducted solidarity with other peoples that could be considered terrorists when we were cornered, when we were strongly harassed," he said. "We had no other choice but to give up or to fight back."

Yet Obama's delay in delisting Cuba comes as the U.S. seeks concessions of its own, namely the easing of restrictions on American diplomats' freedom of movement in Havana and better human rights protections. Obama said the U.S. would continue pressing Cuba on human rights even as he called for Congress to lift the economic embargo on the island nation 90 miles to the south of Florida.

A successful relaunch of U.S.-Cuba relations would form a cornerstone of Obama's foreign policy legacy. But it's an endeavor he can't undertake alone: Only Congress can fully lift the onerous U.S. sanctions regime on Cuba, and there are deep pockets of opposition in the U.S. to taking that step.

Obama took questions from reporters before returning to Washington.

Their rapprochement, first unveiled in a historic policy shift in December, is the central issue at the Summit of the Americas meeting in Panama.

"As we move towards the process of normalization, we'll have our differences government to government with Cuba on many issues. Just as we differ at times with other nations within the Americas, just as we differ with our closest allies," Obama said earlier on Friday.

But the 53-year-old Obama, who was not even born when Fidel and Raul Castro swept to power in Cuba's 1959 revolution, also said the United States is no longer interested in trying to impose its will on Latin America.

"The days in which our agenda in this hemisphere so often presumed that the United States could meddle with impunity, those days are past," he said.