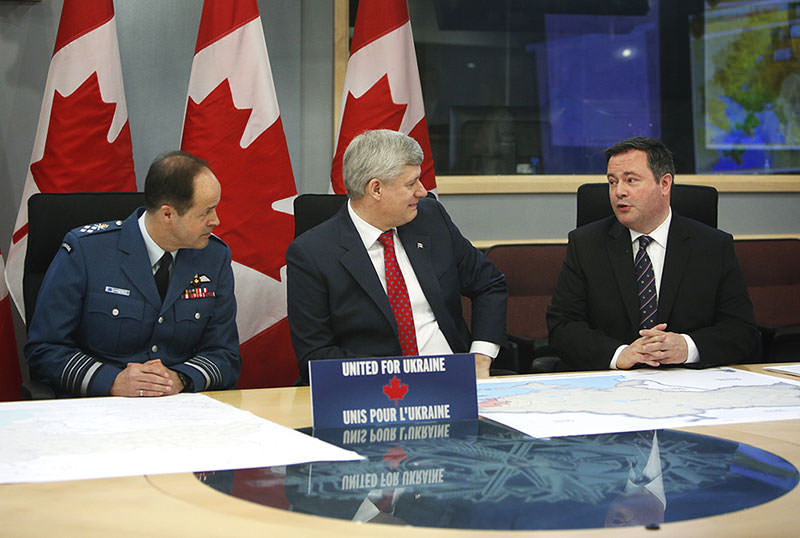 | AA Photo
by Associated Press Apr 14, 2015 12:00 am
Canada is sending around 200 military trainers to beleaguered Ukraine, joining the US and Britain. Ottawa is insisting the troops will be training Kiev's military rather than battling Moscow.

Prime Minister Stephen Harper made the announcement in Ottawa Tuesday, along with Defence Minister Jason Kenney and General Tom Lawson, chief of the defence staff, The Globe and Mail reported.

Defense Minister Jason Kenney said about 150 trainers will be housed at a NATO training center in Yavoriv, near the Polish border. He said the troops will be more than 800 miles (1,287 kilometers) away from the conflict zone.

"It could not be further away," Kenney said. "It is very close to the Polish border in extreme west of Ukraine."

The Canadians will join U.S. and British soldiers early this summer, and the mission will last until March 31, 2017. Britain is sending up to 75 military trainers to provide instruction and training in military intelligence, logistics and battlefield medical procedures. The U-S has committed 800 troops to train three battalions in western Ukraine.

Kenney said the move comes after a request from the government of Ukraine. Kenney said it sends Russian President Vladimir Putin a message of resolution and deterrence. Kenney called it a noncombat mission and said the risk is relatively low.

Kenney said between 25 to 30 troops will be also stationed at the Ukrainian Ministry of Defense Demining Center in Kamyanets-Podilsky, also in western Ukraine.