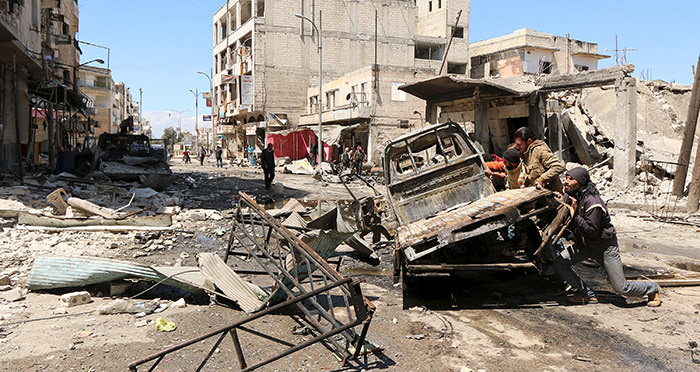 Residents lift up a damaged pick-up truck at a site hit by an airstrike by forces loyal to Syria's President Bashar al-Assad, in Idlib April 14, 2015 (Reuters Photo)
by Anadolu Agency Apr 15, 2015 12:00 am
Human Rights Watch (HRW) said on Tuesday that there is strong evidence to show that the Syrian regime forces launched chemical attacks on Idlib province in northern Syria.

According to a written statement by the international organization, the Assad regime used toxic chemicals in several barrel bomb attacks on Idlib between March 16 and 31.

"Syrian authorities appear once again to have shown complete disregard for human suffering by violating the global prohibition against chemical warfare," Nadim Houry, HRW deputy Middle East and North Africa director, said. "The UN Security Council and countries that are members of the Chemical Weapons Convention need to respond strongly."

Meanwhile, Khaled Khoja, president of the National Coalition for Syrian Revolutionary and Opposition Forces, said on Wednesday that HRW's report is positive.

Khoja also said that the UN Security Council should apply Article 7 of Resolution 2209, which allows states to use force and economic sanctions in peace breach matters.