Obama not to use the term genocide in his April 24th statement, will use 'Meds Yaghern' instead 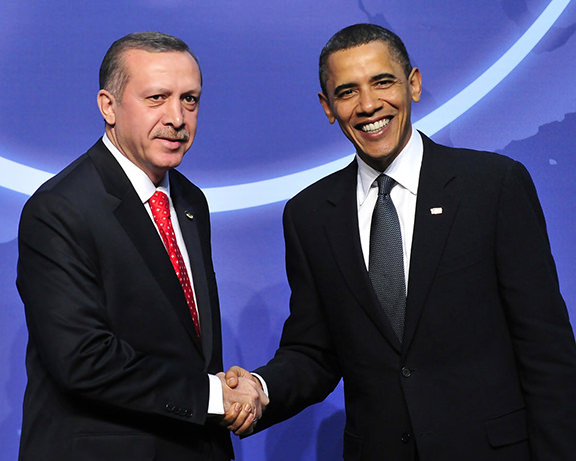 by Ragıp Soylu Apr 22, 2015 12:00 am
Senior White House officials told Armenian-American leaders that President Barack Obama would avoid using the term genocide in his April 24 statement, marking the centennial of the 1915 incidents. Turkish sources also said that U.S. officials had informed Foreign Minister Mevlüt Çavuşoğlu about the decision during his visit to the State Department yesterday.

White House Chief of Staff Dennis McDonough and Deputy National Security Adviser Ben Rhodes today hosted leaders from the Armenian Assembly of America and the Armenian National Committee of America (ANCA) and said that Obama had decided not to use the term genocide in his statement, according to a press release by the ANCA.

A senior administration official told Daily Sabah that Obama will describe the incidents as "Meds Yaghern," an Armenian term that means "great calamity." He avoided the "G" word in his previous statements throughout his terms in office when commemorating the killings of Armenians in 1915.

The official said that they know and respect that there were some who were hoping to hear different language this year. "We understand their perspective, even as we believe that the approach we have taken in previous years remains the right one, both for acknowledging the past and for our ability to work with regional partners to save lives in the present," the official said.
After more than a week of internal debate, top administration officials discussed the final decision with Armenian-American leaders on Tuesday before making it public, according to the Associated Press. "Several U.S. officials said there had been a sharp internal debate over whether to use the 100-year anniversary to call the killings 'genocide' and make good on the president's campaign promise, particularly after Pope Francis used the term earlier this month," the report said.

Some at the State Department, particularly those who deal directly with Turkey and its neighbors in the Middle East, as well as at the Pentagon, argued against using the word, according to officials who spoke on condition of anonymity because they were not authorized to discuss internal deliberations.

They said the damage it would cause to U.S.-Turkey relations at a critical time, notably when Washington needs Ankara's help in fighting the Islamic State of Iraq and al-Sham (ISIS) in Syria and Iraq, would far outweigh the immediate benefits. The safety of U.S. diplomats and troops in Turkey was also a consideration, the officials said.

On the other side, officials at the White House and State Department who deal more directly with human rights issues, including U.S. ambassador to the U.N. Samantha Power, wanted the president to refer to the 1915 events as genocide, the officials said. Asked if there was an internal rift on the issue, one senior official involved in the discussion simply said, "Yes."

That official explained that alienating the Turks at this point in Obama's presidency would mean accepting that the U.S. investment in good relations with President Recep Tayyip Erdoğan had failed. That relationship has been fraught with difficulty in recent years over human rights concerns, among other issues.
The announcement did not make Armenian-Americans happy.
The ANCA lashed out at the decision, calling it a "surrender" and "national disgrace." ANCA Chairman Ken Hachikian also blamed Obama for enforcing a foreign power's "gag rule."

The Vatican reiterated and European Parliament recently recognized the 1915 incidents as genocide.

In a separate release, the White House said Obama had asked Treasury Secretary Jacob J. Lew to lead a presidential delegation to Yerevan on April 24 to stand in solidarity with the Armenian people as they commemorate this most solemn of anniversaries. Richard M. Mills, Jr., the United States ambassador to Armenia, and four members of Congress will also attend the ceremonies.