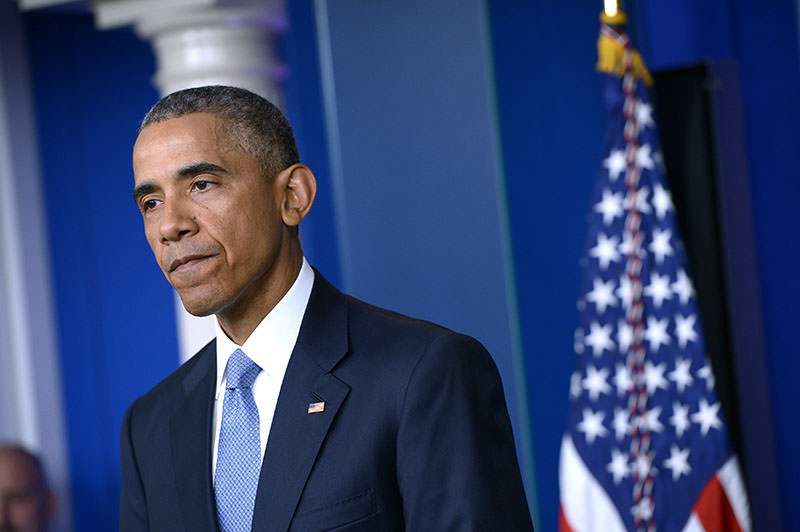 US President Obama speaks during press conference in White House on April 23, 2015 (AFP Photo)
by reuters Apr 23, 2015 12:00 am
One American and one Italian who had been held hostage by al Qaeda in the border region of Pakistan and Afghanistan were killed in a U.S. counterterrorism operation in January, the White House said on Thursday.

In a written statement, the White House expressed "tremendous sorrow" over the hostage deaths and said the United States had no reason to believe hostages were at the al Qaeda related compound targeted in the operation.

"Analysis of all available information has led the intelligence community to judge with high confidence that the operation accidentally killed both hostages," the statement said.

"No words can fully express our regret over this terrible tragedy," the statement added.

U.S. President Barack Obama also made important remarks regarding the incident, following White House's statements on Thursday. Obama said during the press conference that he profoundly regrets the deadly operations and takes "full responsibility" of them.

He expressed his profound regrets to the families of the killed hostages, saying, "We will identify the lessons that can be learned from this tragedy and any changes that should be made. We will do our utmost to ensure it is not repeated."

"As a husband and as a father, I cannot begin to imagine the anguish that the Weinstein and Lo Porto families are enduring today," Obama told reporters, with a deep sigh, saying he has ordered a full review of the operaitons.

Weinstein was abducted in Lahore, Pakistan, in 2011 while working for a U.S. consulting firm. Al Qaeda had asked to trade him for members of the group being held by the United States.

Weinstein was seen in videos released in May 2012 December 2013, asking for Obama to intervene on his behalf and saying he was suffering from heart problems and asthma.

Italian aid worker Lo Porto has been missing in Pakistan since January 2012.

The White House did not describe the operation, but the Wall Street Journal reported that it was the first known instance in which the United States has accidentally killed a hostage in a drone strike.
Last Update: Apr 23, 2015 6:50 pm
RELATED TOPICS