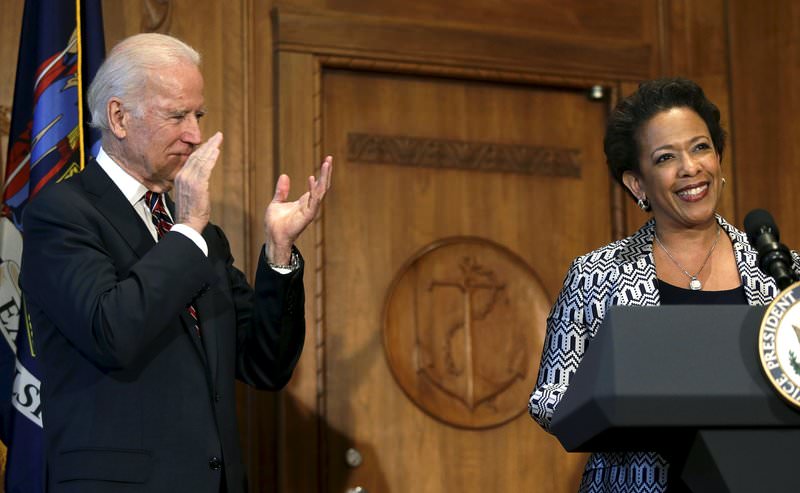 | Reuters Photo
by Daily Sabah with Agencies Apr 27, 2015 12:00 am
President Barack Obama's choice for US attorney general, Loretta Lynch, was sworn in at her new job on Monday, becoming the first African-American woman to serve as the top US law enforcement official.

She said her confirmation as attorney general showed that "we can do anything" and pledged to deal with cyber-attacks and other threats facing the country.

"We can restore trust and faith both in our laws and in those who enforce them," Lynch said, an apparent reference to ongoing efforts to repair relations between police departments and minority communities.

Becoming the 83rd attorney general of the U.S., Lynch vowed "to not just represent the law and enforce the law, but to use it to make real the promise of America - the promise of fairness. The promise of equality. Of liberty and justice for all," she said in remarks after taking her oath.

Vice President Joe Biden administered the oath of office to Lynch at a Justice Department ceremony. Lynch replaces Eric Holder, who left the job Friday after six years as head of the department.

The 55-year-old Lynch was confirmed by the Senate on Thursday following a months-long delay in which her nomination became caught up in a dispute over human trafficking legislation.

"It's about time," Biden said to applause.

She was previously the U.S. attorney for the Eastern District of New York, which encompasses much of New York City, and is expected to serve as the top federal law enforcement official for the remaining 20 months of the Obama administration.
Last Update: Apr 28, 2015 10:32 am
RELATED TOPICS