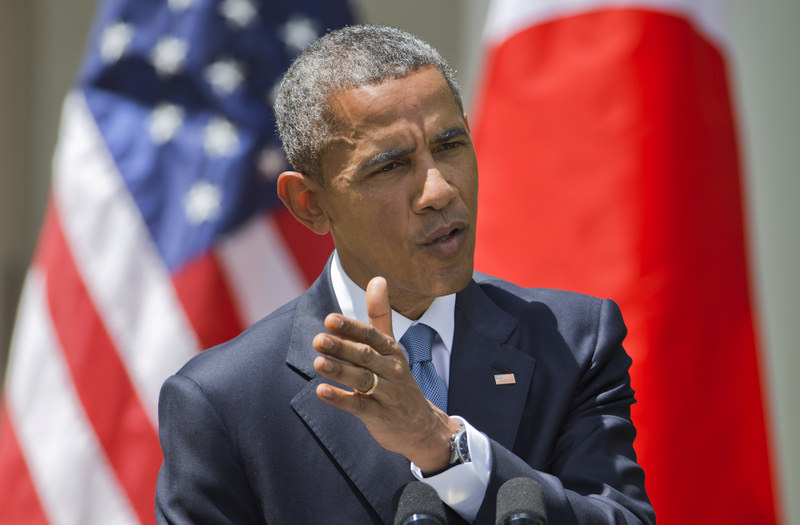 President Barack Obama speaks about recent unrest in Baltimore during a joint news conference with Japanese Prime Minister Shinzo Abe, Tuesday, April 28, 2015, in White House in Washington (AP Photo)
by French Press Agency - AFP
Apr 28, 2015 12:00 am
US President Barack Obama on Tuesday condemned rioting in Baltimore, saying there was "no excuse" for the violence, but acknowledged a "slow-rolling crisis" in community policing, especially in treatment of African Americans.

"We have seen too many instances of what appears to be police officers interacting with individuals - primarily African American, often poor - in ways that raise troubling questions," Obama told reporters at the White House.

Obama was reacting to the violence that erupted in Baltimore after the funeral of Freddie Gray, a 25-year-old African American man who died after suffering a spine injury while in police custody.

Youths torched cars, pelted police with stones and ransacked stores in the US East Coast port city, prompting authorities to call in the National Guard and impose a nighttime curfew beginning late Tuesday.

"This has been a slow-rolling crisis that has been going on for a long time. This is not new. And we shouldn't pretend that it's new," Obama said, referring to tensions in US communities over police actions.

The president said if the country wanted to solve the problem, it needed not only to invest in police training, but also in early education and criminal justice reform.