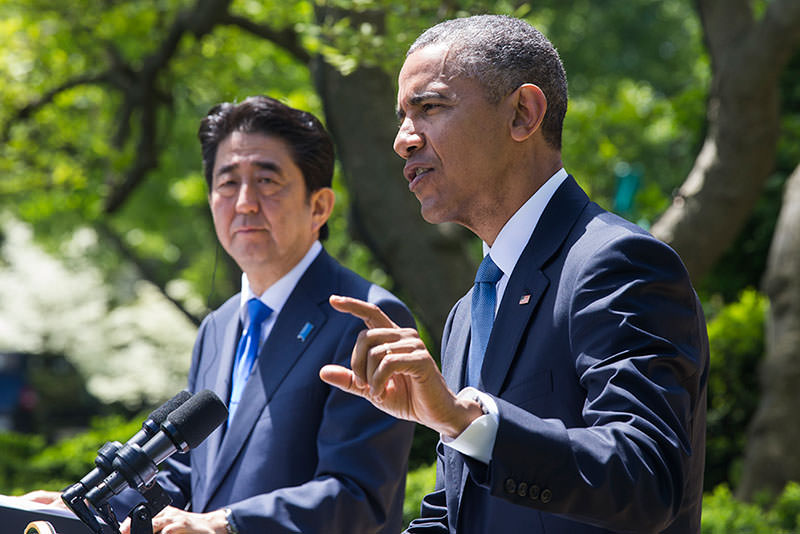 Obama holds a joint press conference with Shinzo Abe, Prime Minister of Japan, in the Rose Garden of the White House in Washington DC, USA, 28 April 2015 (EPA Photo)
by Daily Sabah with Wires Apr 29, 2015 12:00 am
U.S. President Barack Obama reportedly said on Wednesday that the death of Freddie Gray in Baltimore is not an "isolated incident", and the country has some broader issues. Obama made the remarks in an interview to radio show host Steve Harvey.

Obama reportedly told the radio show host, "Once the situation is cleared up, I think there's going to be a time when I go back to Baltimore."

He condemned the rioting and lootings in the city, and reportedly said: "My heart goes out to the police officers who were injured. They showed appropriate restraint."

He called on police departments "to hold accountable people when they do something wrong" and said Attorney General Loretta Lynch, the top U.S. law enforcement official, is reaching out to mayors about resources to retrain police and provide body cameras.

The death of 25-year-old Freddie Gray has renewed a national movement in the U.S. against police use of lethal force, which protesters say is disproportionately exercised against minorities, that flared after police killed unarmed black men last year in Ferguson, Missouri; New York City and elsewhere.

Thousands of police and National Guard troops patrolled the streets of Baltimore on Tuesday night, and the curfew was scheduled to remain in place for six more nights.

In a rare move, the Major League Baseball game between the Baltimore Orioles and Chicago White Sox will be played as scheduled Wednesday but closed to the public.

In Chicago on Tuesday, about 500 people demonstrated outside police headquarters and marched in solidarity with the people of Baltimore, chanting "Stop Police Violence." At least one person was arrested, but the event was mostly peaceful.

Local media reported that two people were injured overnight following gunfire in Ferguson, Missouri, during a protest near where unarmed black teenager Michael Brown was shot dead by police last August. It was not clear if the shootings were linked or connected to the demonstration.

Freddie Gray was arrested on April 12 after running from officers. He was taken to the police station in a van, with no seat restraint. A lawyer for Gray's family says his spine was 80 percent severed at the neck while in custody.

Six officers have been suspended, and the U.S. Justice Department is investigating possible civil rights violations.

"There's no excuse for the kind of violence that we saw (Monday)," Obama had said on Tuesday. "It is counterproductive," he had told reporters at the White House.

The rioting followed a week of largely peaceful protests in the city, where almost a quarter of the 620,000 people live below the poverty line, with demonstrators demanding answers in Gray's death.

Police have said they would conclude their investigation by Friday and forward the results to state prosecutors.