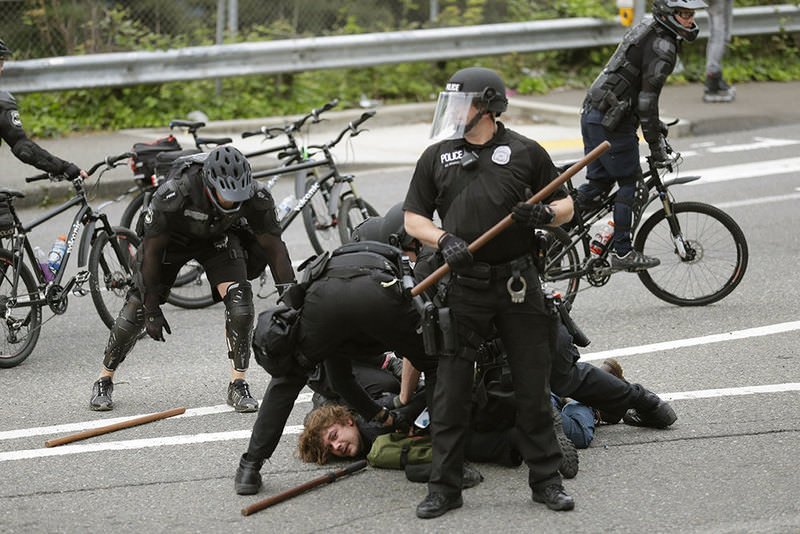 by Associated Press May 02, 2015 12:00 am
Demonstrators clashed with police in two cities in the Pacific Northwest after earlier May Day marches in support of more rights for workers and immigrants and an end to police brutality.

"This is no longer demonstration management, this has turned into a riot," said Capt. Chris Fowler, who was overseeing police response to May Day activities in the city.

Mayor Ed Murray said police would work to protect people and property "and will make arrests when necessary."

A daytime worker and immigrant rights rally that drew hundreds of people in Seattle was peaceful, but tensions flared during the evening event, which was billed as an anti-capitalist march.

In Portland, Oregon, authorities said an unruly crowd hurled projectiles and chairs at officers Friday evening. Police there temporarily closed a major bridge over the Willamette River during the height of the evening commute and pepper sprayed some demonstrators when a May Day march deviated from its permitted route through downtown.

Police said one officer was assaulted and was taken to a precinct for medical treatment.

Marches held in cities from Minneapolis to Oakland, California, drew crowds ranging from a few dozens to hundreds of people, but they were largely peaceful.

In Denver, two dozen protesters railed against economic inequality, while about 1,000 marched in New York at an event that also decried police abuse in the wake of the in-custody death of Freddie Gray in Baltimore. In Austin, Texas, about 200 marchers railing against police brutality closed a downtown bridge with their numbers, but police blocked them from marching onto a freeway.

In Chicago, about 400 people marched, some to protest recent police incidents and some to recognize May Day's message of workers' rights.

Richard Malmin, a 73-year-old activist, said he participates every year but this rally was bigger due to the death of Gray, whose spine was severed while in Baltimore police custody last month. On Friday, six police officers were charged in his death.

While labor unions have long led demonstrations on International Workers' Day, the May 1 marches got a boost in 2006 when stringent immigration legislation drove hundreds of thousands of demonstrators to rally in the streets. Since then, attendance at the annual rallies has been much smaller.

Some labor and immigrant advocates broadened their message this year to also address police brutality, joining a series of protests underway in several cities over Gray's death.

In Los Angeles, a few hundred gathered to encourage the implementation of President Obama's program to protect millions of immigrants in the country illegally from deportation. They also called for a raise to minimum wage.