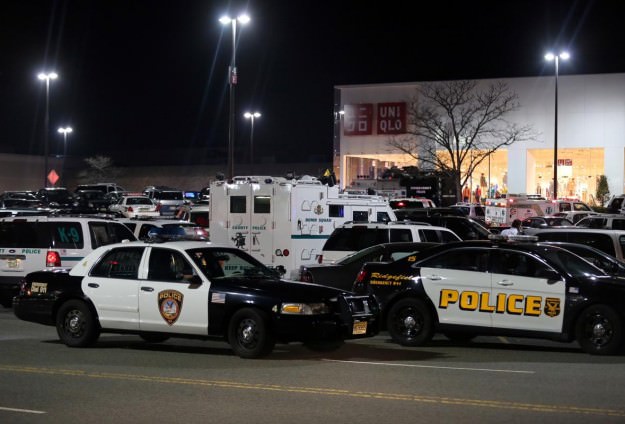 |AA Photo
by Anadolu Agency May 05, 2015 12:00 am
People of all faiths should be concerned about events such as the anti-Islam caricature contest in Texas, a spokesman and leader of the Council on American-Islamic Relations told The Anadolu Agency on Monday.

"These events should be taken seriously by people of all faiths. Whenever hatred and bigotry spread within a society, it hurts all members of that society," Ibrahim Hooper said.

The event, billed as the "Muhammad Art Exhibit and Cartoon Contest," and sponsored by the New York-based anti-Muslim and pro-Israel American Freedom Defense Initiative group, took place Sunday at the Curtis Culwell Center in the city of Garland.

Two suspects, who allegedly opened fire outside the center, were shot dead on Sunday evening; one security officer was also left injured.

"Obviously, no Muslim appreciates the tags on the prophet, peace be upon him, but we believe that even hate speech like the one promoted at that conference was no excuse for a violent attack," Hooper added.

He highlighted the fact that there had been a number of other such incidents in the past, which exposed bias against Muslims in Texas.

Early March, an Iraqi man was killed in Dallas, Texas, when he was out taking a picture of snowfall outside his house.

The slain Muslim man, Ahmed al-Jumaili, had only recently fled violence in his homeland three weeks before he was shot dead.

In other recent incidents, three Muslim students were shot dead in North Carolina.

Although the bill did not specifically refer to any particular religion, many believed it was a reaction to a voluntary alleged "Islamic tribunal" operating in Texas that aimed to resolve Muslims' civil disputes in family and business matters in a non-binding way.

During the Texas Capitol Days between February 9 and March 12, a Republican state representative, Molly White, had asked Muslims to give allegiance to America and denounce extremist groups.

"I did leave an Israeli flag on the reception desk in my office with instructions to staff to ask representatives from the Muslim community to renounce Islamic terrorist groups and publicly announce allegiance to America and our laws," White posted on Facebook. "We will see how long they stay in my office," she added. Hooper said, however, such cases were not limited to Texas.

"We've seen similar events in different states across the country," he said. "It just happened to be a series of events taking place in Texas," he added.

He asked the Muslim community to reach out to people from other faiths and teach them about Islam and inform them about Muslims, adding that when people get to know more about Islam, there was less prejudice against Muslims.

However, he acknowledged, that those committing hate speech against Muslims were not open to dialogue. "They are so filled with hate that, I think, it is almost pointless to contact them," he added.

Hooper recalled that Pamela Geller, president of the American Freedom Defense and pioneer of the caricature contest, was famous for her anti-Islam views and for organizing anti-Islam events across the country.

"We have to defend freedom, there is no doubt about that, but this is not the way to go about it," Mike Ghouse, president of the World Muslim Congress based in Texas, told The Anadolu Agency.

"Her motivation is not a positive one. She is frustrated personally in her life. She is kind of enjoying the show. In nature, she is very mischievous," he added.

Ghouse recalled that three years ago when Geller put up some anti-Islam posters on the subway billboards in New York, he warned her against the move.

The Southern Poverty Law Center, a nonprofit organization that tracks hate groups, lists her as an "extremist" and calls her "the anti-Muslim movement's most visible and flamboyant figurehead."

The center also identifies her as "relentlessly shrill and coarse in her broad-brush denunciations of Islam."

In one of her recent subway ads in New York City, she put up a photo of the World Trade Center exploding in flames next to a quote from the Quran that read: "Soon shall we cast terror into the hearts of the unbelievers."

Geller has gone as far as to claim that U.S. President Barack Obama was actually the "love child" of Malcolm X.
Last Update: May 05, 2015 6:21 pm
RELATED TOPICS