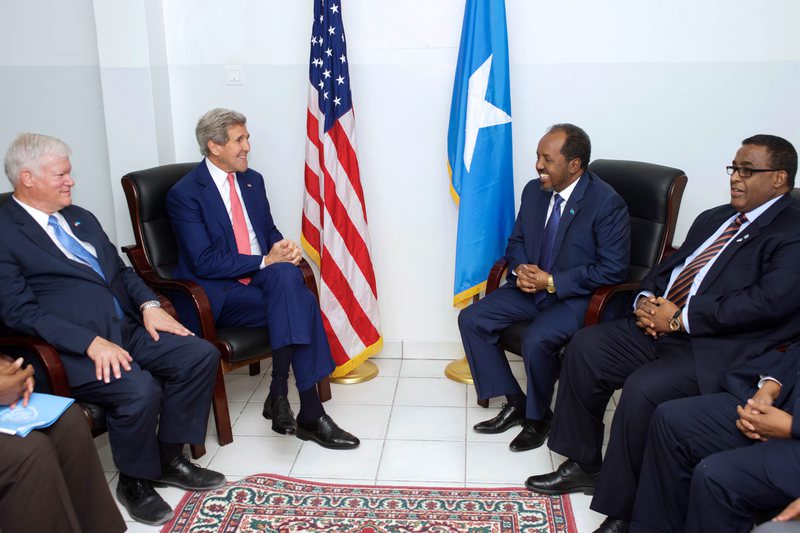 |EPA Photo
by May 05, 2015 12:00 am
The United States Secretary of the State John Kerry became the first US Secretary of State to travel to Somalia on Tuesday, with his brief visit interpreted as a warning to terrorists in the country.

Kerry flew to Mogadishu after a visit to Kenya, met leaders at the airport and left.

"His visit will send a clear signal to terrorist groups that there will be no position for terrorists in Somalia," said a Somali official close to the presidency who asked not to be named.

The subjects of discussion included Somalia's fight against the terrorist group al-Shabaab, corruption and the 2016 elections that are hoped will stabilize the country after decades of chaos since the government collapsed in 1991.

Security was beefed up in Mogadishu, with a heavy presence of Somali soldiers and African Union troops, who are helping the government fight al-Shabaab.

The US has carried out drone strikes against al-Shabaab in Somalia, killing its leader Ahmed Godane last year, and has reportedly trained Somali elite commandos to fight the group.

The White House recently nominated its its first ambassador to Somalia since 1991, Katherine S. Dhanani, pending approval by the Senate. If approved, she would be based in the US embassy in Nairobi pending further developments, the US State Department said in Washington.

"As security improves in Mogadishu, we hope that the US will reopen its embassy in the near future," said a senior security official.
Last Update: May 06, 2015 10:58 am
RELATED TOPICS