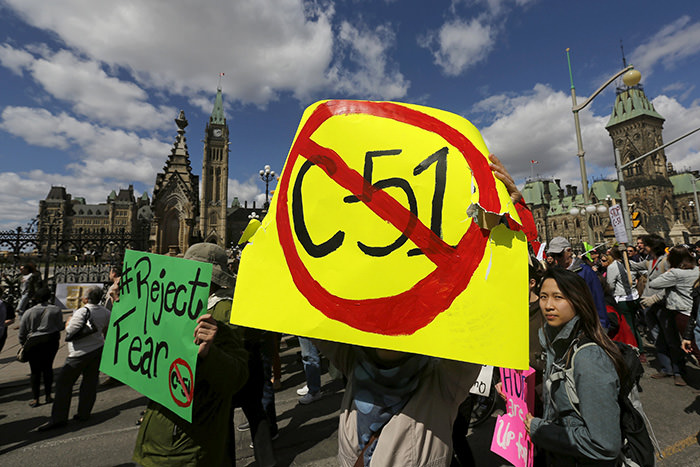 People take part in a demonstration against Bill C-51, the Canadian government's proposed anti-terror legislation, in Ottawa April 18, 2015 (Reuters Photo)
by Anadolu Agency May 06, 2015 12:00 am
The Parliament is set to pass the controversial anti-terror Bill C-51 on Tuesday with many Muslims worried about the possible repercussions to their communities.

Prime Minister Stephen Harper, who introduced the bill in January, says it will give police and security forces "the required tools and flexibility" needed to put an end to threats before they happen.

But critics fear the bill gives too much power to authorities and too little oversight to ensure that power is not abused.

The National Council of Canadian Muslims, or NCCM, an independent, non-partisan, non-profit grassroots organization, says it is supportive of measures that enhance security but it also fears the bill does not protect human rights.

"(Bill C-51) expands the national security agencies' powers without any meaningful and concomitant increase in oversight, review and redress mechanisms" the NCCM says in a 10-page summary of the bill. The NCCM document was submitted in March to the House of Commons Committee on Public Safety and National Security, which gathered views on Bill C-51.

The NCCM report makes clear that the bill will add to "the burden of an expression based offence (that) will fall disproportionately on Muslim communities. An already difficult and social political climate will become more difficult."

The NCCM found the "Advocating or Promoting Terrorism Offence" section of the bill particularly disturbing.

"Every person who, by communicating statements, knowingly advocates or promotes the commission of terrorism offences in general, other than an offence under this section, while knowing that any of those offences may be committed, is guilty of an indictable offence and is liable to imprisonment for a term of not more than five years," the provision states.

The NCCM said the provision is so "broad and vague" that it will "likely lead to a chilling effect on constitutionally protected freedoms that has wide reaching implications for a broad spectrum of Canadians, and in particular for Muslim communities."

The conclusions reached in the report are particularly damning to Harper's Conservatives and the bill.

"The government has failed to demonstrate a connection between the measures proposed and a compelling need that would justify the measures, not to mention the harm that this law is certain to cause to constitutional rights and freedoms," the report states.

And Amira Elghawaby, a human rights co-ordinator for the NCCM, in April wrote a commentary, "Who has the most to fear from C-51? Canadian Muslims."

"Under C-51, Canadian Muslims can expect more discrimination," she penned. "Even after the Conservative government buckled to pressure to amend the law, Canadians can still be deemed too dangerous to travel by airline and won't be allowed to challenge the evidence' against them," Elghawaby continued. "As lawyer and author Faisal Kutty puts it, Canadian Muslims can be considered "too guilty to fly, but too innocent to charge."

Other critics of the bill include native groups who fear it will be used to prevent protests about issues such as treaty and land rights.

While Parliament is expected to pass the bill today, it will not become the law of the land until later this month.
Last Update: May 06, 2015 11:45 am
RELATED TOPICS