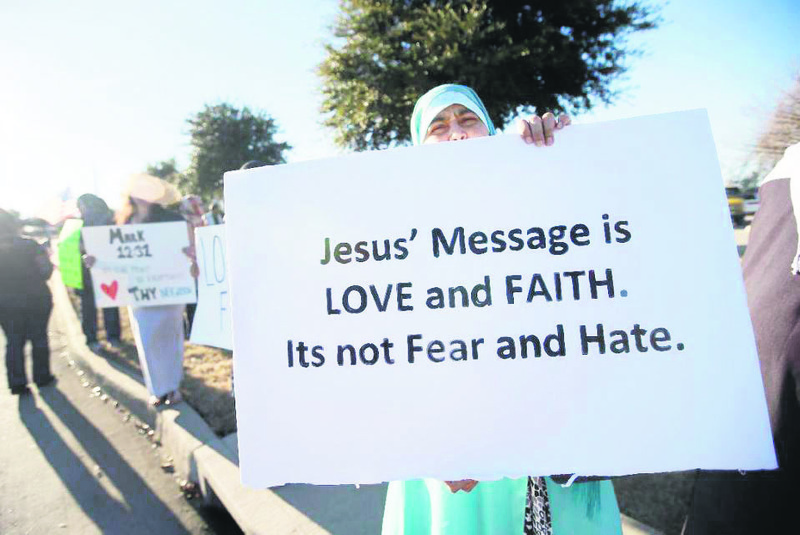 by Associated Press May 07, 2015 12:00 am
When an outspoken opponent of radical Islam sought to mock Prophet Muhammad in Texas, home to one of the nation's largest Islamic communities, local Muslims were encouraged to ignore her, and they did. No one protested when Pamela Geller's cartoon contest attracted about 200 people to suburban Dallas Sunday, even though some Muslims in Texas were already feeling aggrieved and fearful over growing anti-Islamic sentiment in the state.

Then, two men with attack rifles drove in from Arizona and opened fire on officers guarding the conference center in Garland. Both were shot dead, an officer was shot in the leg, and from the other side of the world, the Islamic State of Iraq and al-Sham (ISIS) made an unproven claim of responsibility.

"We condemn obviously the attack in the strongest terms, and we are glad that the police officer is OK," Suleiman added. "This is what extremists on both sides want: whether it's Geller or whether it's ISIS. They want this all-out war. That's not what we're about."

Anti-Islam sentiment has been reverberating in Texas, from the state Capitol to local governments. Tensions rose in Irving after the City Council endorsed one of several bills to forbid judges from rulings based on "foreign laws."

"I think it is redundant — no law can override the Constitution," said Malik Abdul-Rahman, an Irving barber. "I think it is more intolerance and bigotry than anything."

Islam holds that any depictions of its prophet are deeply offensive, and yet Geller's contest rules sought images that engage "in criticism of and mockery of Muhammad and the belief system and ideology that underlies global jihad terrorism." She also brought in a speaker known for his outspoken criticism of Islam, Dutch lawmaker Geert Wilders.

Geller, president of the New York-based American Freedom Defense Initiative, booked Sunday's event at the same venue where she led about 1,000 protesters at a January fundraiser that the Chicago-based group Sound Vision held to combat negative perceptions of Islam.

"We are standing against the most brutal, radical and extreme ideology on the face of the Earth," Geller declared.

A man with a bullhorn repeatedly called Muhammad a pedophile. One person chanted "Go back to your own countries! We don't want you here!" Another held a sign saying "Insult those who behead others."

Texas was a natural stop for Sound Vision, with more people associated with Muslim congregations, about 422,000, or 1.7 percent of its population, than any other state, according to a 2010 census by the Association of Statisticians of American Religious Bodies. Dallas-Fort Worth and Houston each have about 155,000 Muslim adherents.

Later in January, hecklers greeted Muslims for the first time at their lobbying day at the Texas Capitol in Austin.

But six bills addressing foreign laws, which opponents believe are anti-Muslim, are now pending in the Texas Legislature. Similar legislation banning judges from violating state and federal laws has been introduced this year in almost 20 states, according to the National Conference of State Legislatures. Nine other states have passed them.

The lawmakers have gone out of their way to avoid mentioning Sharia, or Islamic law, but their constituents have done it for them.

"The concern is they're hearing about it, they're seeing it, they're fearful," Republican state Rep. Dan Flynn said. "They don't want this foot in the door."

Republican state Rep. Jeff Leach suggested that his bill would put limits on an Islamic tribunal in Dallas.

The panel advertises voluntary, non-binding arbitration to resolve disputes among Muslims in accordance with both Sharia traditions and U.S. law, and says similar religious tribunals have helped the American Jewish and American Christian faith communities resolve disputes for decades.

"Some people will tell you: 'Is this really a problem? Is this a solution looking for a problem?'" Leach said as he promoted his bill at the Texas Faith and Family Day rally in Austin in February. "We want to codify that, to ensure that there is no judge in Texas who should even think twice about violating the Texas or United States Constitution."

Irving Mayor Beth Van Duyne weighed in on Facebook, saying she would investigate rumors of a Sharia law court in her city, and that if "there are violations of basic rights occurring, I will not stand idle and will fight with every fiber of my being against this action." It turned out that an imam from Irving served on the Dallas panel.

In March, an Iraqi man was fatally shot in Dallas while photographing a snowfall, rattling nerves even though police later determined it was random and not a hate crime.

"There is a lot of fear. So if anything happens, until proven otherwise, and even then, the violence sticks with you," Alia Salem, who directs the Dallas-Fort Worth chapter of the Council on American-Islamic Relations.

In April, people lined up to denounce Islam two weeks after the Irving City Council voted to endorse Leach's bill. One woman declared "Sharia law is Islam, and Islam's goal is to immigrate, assimilate and annihilate." A man sitting in the audience shouted "That is offensive!" and was escorted out.

As Texans took stock of Sunday's shooting, Muslim leaders praised police for proactively guarding the area's mosques and Islamic schools, and thanked the FBI for reaching out to their community.

"Whatever we can do to ensure that we'll keep our cities safe, we'll do everything possible," said Azhar Azeez, president of the Islamic Society of North America.
Last Update: May 07, 2015 11:00 pm
RELATED TOPICS