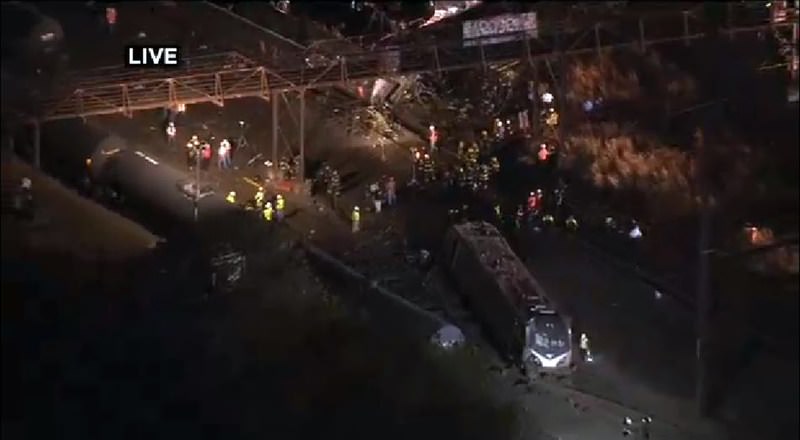 | AFP Photo
by May 13, 2015 12:00 am
The death toll from the derailment of a US passenger train in Philadelphia rose to seven Wednesday, as excessive speed emerged as a possible cause of the crash.

As experts from the National Transportation Safety Board and other agencies combed through the twisted wreckage for clues, several reports suggested the train may have been traveling at twice the authorized speed when it derailed.

More than 200 people were injured in the crash late Tuesday along the busy northeast US rail corridor linking Washington and New York, one of the most traveled in the Amtrak network.

Officials warned some of the 243 passengers and crew believed to have been on the train had not yet been accounted for, meaning the death toll could still rise.

The train's "black box" was recovered and sent for analysis, hopefully yielding much needed information about what went wrong.

The Washington Post and The Wall Street Journal, citing unnamed sources close to the investigation, said the train was traveling at 100 miles (160 kilometers) per hour -- twice the speed allowed -- when it went around a sharp curve.

The NTSB was due to give a press conference at 5:00 pm (2100 GMT), at which the information about the train's speed could be revealed.

"We'll get to the bottom of it and figure out what happened, why it happened, but that will take some time," Philadelphia Mayor Michael Nutter told reporters.

Sam Phillips, the city's director of emergency management, said the city's hospitals had treated "over 200 patients last night and this morning."

Reportedly among the dead were a staffer for the Associated Press and a midshipman at the US Naval Academy, according to the AP and the Washington Post. Many of the injured suffered broken bones, a hospital official said.

Witnesses who had been traveling aboard Amtrak Train 188 described scenes of panic and chaos, as cars tumbled over, sending passengers banging into one another and suitcases flying.

One of the train cars was completely flattened in the crash, which took place at about 9:30 pm Tuesday. Wheels lay scattered by the tracks.

Local resident Iwina Washington, 27, told AFP she saw shell-shocked survivors with blood on their faces, looking dazed, as rescue personnel converged on the scene with flashlights.

"It looked like an episode from 'The Walking Dead'," Washington said.

Robert Sumwalt of the NTSB said investigators were looking at "the track, the rail signals, the operation of the train, the mechanical condition of the train (and) human performance."

He said the black box could give indications about how fast the train was going when it went into the curve, and whether the brakes were applied.

"There are many first responders out there that are working. They are carefully examining the equipment to see if there is anyone else in the rail cars," Sumwalt said.

The train's engineer was injured but was treated and able to give a statement to police, Nutter told reporters. The conductor was also injured.

Officials were still working to reconcile the passenger manifest with the lists of injured, and encouraged anyone who may have left the scene without being counted to contact Amtrak.

Max Helfman, 19, said he was with his mother in the last car of the train, which did not have seatbelts, when they suddenly felt it shake. It then flipped over.

"People were thrown to the ground," Helfman told the Philadelphia Inquirer.

"Chairs inside the train became unscrewed and suitcases were falling on people. My mother flew into me and I literally had to catch her. People were bleeding from their head. It was awful."

Hydraulic tools had to be used to remove passengers from some of the most badly damaged train cars, firefighters said.

Other passengers had to kick out windows to escape, according to former Pennsylvania congressman Patrick Murphy, who was onboard.

Train services between Philadelphia and New York were likely to be suspended for the rest of the week, Nutter said.

"This is a tragedy that touches us all," President Barack Obama said in a statement.