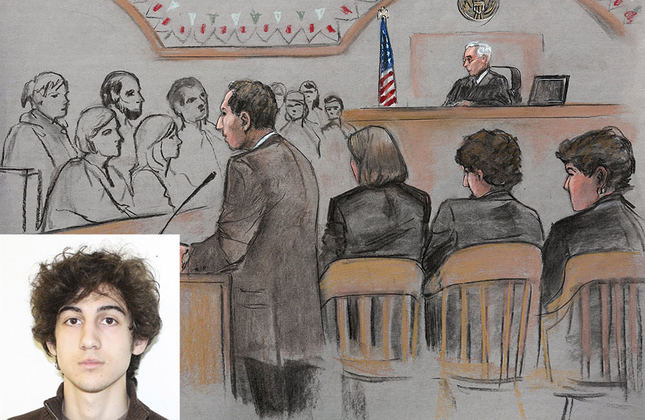 by Compiled from Wire Services May 15, 2015 12:00 am
Boston Marathon bomber Dzhokhar Tsarnaev was sentenced to death Friday for the April 15, 2013, attack that killed three people and injured 260, The Boston Globe reported.

"We vote that Dzhokhar Tsarnaev should be sentenced to death," the jury said.

The 12-member jury convicted Tsarnaev on April 8 on all 30 counts in the double bombings and the killing of a police officer during a manhunt following the attack.

The jury unanimously agreed that Tsarnaev should be executed for some of those counts.

During deliberations, the jury had to weigh mitigating and aggravating factors and then vote for or against the death penalty for each of the 17 counts.

The jury had to decide unanimously for the death penalty on at least one count for Tsarnaev to be sentenced to die.

During the sentencing phase, Tsarnaev's defence team argued that he acted under the influence of his radicalized older brother, Tamerlan, who was the mastermind behind the attacks. Tamerlan died during the manhunt that ensued after the bombing.

Victims and their families were present in the courtroom as the verdict was read out, among them the parents of Martin Richards, the 8-year-old boy who was killed in the bombing.

Before the sentencing began, the Richards family asked the prosecution to drop the death penalty to allow victims to move on.

The Boston bombing was the deadliest terrorist attack on US soil since the September 11, 2001, suicide strikes against New York and Washington.