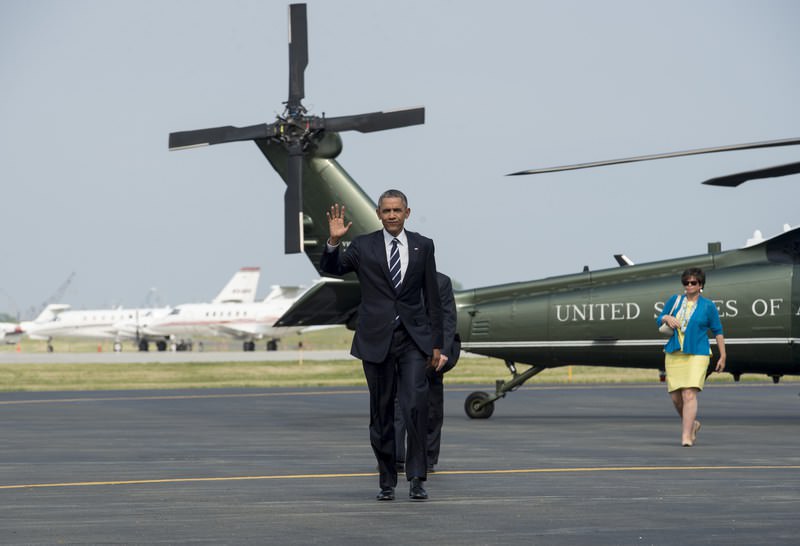 by Daily Sabah with Reuters May 18, 2015 12:00 am
President Barack Obama banned police departments from using certain military equipment and restricted the use of riot shields and other hardware on Monday, following unrest in U.S. cities over the deaths of black men at the hands of police officers.

Obama announced the steps, which are the result of an executive order, during a visit to Camden, New Jersey, where he pushed efforts to encourage trust-building between police and the communities they serve.

"We've seen how militarized gear can sometimes give people the feeling like there's an occupied force, as opposed to a force that is part of that community it is protecting and serving," Obama said in a speech at a community center in Camden, a city plagued by high rates of poverty and crime.

Police departments across the country were able to acquire U.S. military equipment after the Sept. 11, 2001 attacks.

Although supporters have touted the hardware as a useful tool for law enforcement - the perpetrators of the 2013 Boston marathon bombing were found using such equipment - critics complain of the militarization of American streets.

That debate has intensified in the wake of unrest following a string of deadly encounters between black men and police.

Michael Brown, an unarmed teenager, was shot to death by a Ferguson, Missouri police officer in August, causing protests and riots. Tensions flared again last month when 50-year-old Walter Scott was shot by an officer while fleeing the scene of a traffic stop in North Charleston, South Carolina, and 25-year-old Freddie Gray died in Baltimore after sustaining spinal injuries while in police custody.

Gray's death touched off some of the worst rioting in a U.S. city since the late 1960s and also highlighted divisions between black and white Americans.

In a Reuters/Ipsos poll taken after the protests in Baltimore, 69 percent of respondents said America has a serious issue with race. Nearly three-quarters said there is more racism in the United States than the country is willing to admit.

In the aftermath of the Baltimore riots, Obama spoke out more about race, including a speech in the Bronx on increasing opportunity for young minority men and during a panel discussion on poverty in Washington.

"Race issues have been more present over the past year for this country. We've seen, since Ferguson, issues that have been bubbling up in communities becoming much more present," said Rashad Robinson, executive director of colorofchange.org, a group that aims to strengthen the black community's political voice in America.

Obama's ban, which effectively prevents the U.S. military from providing certain equipment to local police, means that explosive-resistant vehicles with tracked wheels like those seen on army tanks and other similar hardware will no longer be allowed to be used by police, the White House said in a report issued hours before his speech in Camden.

For other types of equipment, such as MRAP (mine-resistant ambush protected) vehicles and riot shields, departments will have to provide added justification for their use.

Obama's remarks in Camden mark the fourth time in many weeks that he has held an event to discuss his ideas for improving life for poor black communities.

Following the shooting of unarmed black teen, Trayvon Martin, by a volunteer neighborhood watchman in 2012, Obama discussed the issue in personal terms, saying that if he had a son, he would have looked like Martin.

In response to a question in 2009, Obama said he thought police in Cambridge, Massachusetts, had acted "stupidly" when they arrested Henry Louis Gates, a black Harvard professor who was mistaken for a burglar at his own home.

Obama faced a backlash from law enforcement groups who accused him of commenting before he knew all the details of the case.

"For a long time in this country we've had a hard time developing a narrative around poverty, around race, so when there are incidents like this that sit at the apex of both, different people are going to have different reactions to that," Jawando said.