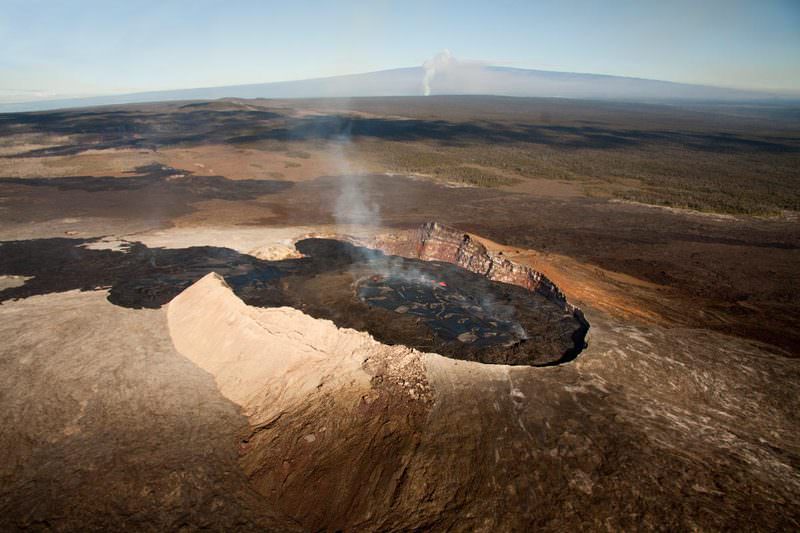 by Daily Sabah with Wires
May 19, 2015 12:00 am
Scientists are closely watching Kilauea volcano on Hawaii's Big Island for a possible eruption after volatile changes in the level of a lake of lava on its summit and a series of earthquakes, the U.S. Geological Survey said on Monday.

Observers said there was a chance of an eruption in the Southwest Rift Zone of Kilauea, one of the most active in the world, accompanied by more earthquakes, according to the USGS Hawaiian Volcano Observatory.

"The overall evolution of unrest in Kilauea's summit area and upper rift zones in the coming weeks to months is uncertain," the Hawaii Volcano Observatory said in a statement.

"The magma storage system within Kilauea is highly pressurized at this time, and future changes in the location of unrest, and the potential for eruption, could unfold quickly (in days to hours)," it said.

An eruption in the Southwest Rift Zone would not pose a risk to people because that side of the volcano is not inhabited.

The lava lake in the Overlook crater reached record heights and overflowed its rim in late April, but by May 9 it began dropping again, and was 200 feet below its rim by Saturday, the Hawaii Volcano Observatory said.

Seismic activity around Kilauea Volcano had slowed but remained elevated and the lake of lava had sunk over the past several days, observatory said.

Hundreds of smaller earthquakes were also recorded, with as many as 25 per hour shaking the area on Friday.

Last June, fingers of molten rock let loose in the Eastern Rift Zone menaced residents in the town of Pahoa, on the eastern edge of the Big Island. The slow moving trickles of magma destroyed a home and threatened to cut off a main highway before stalling.