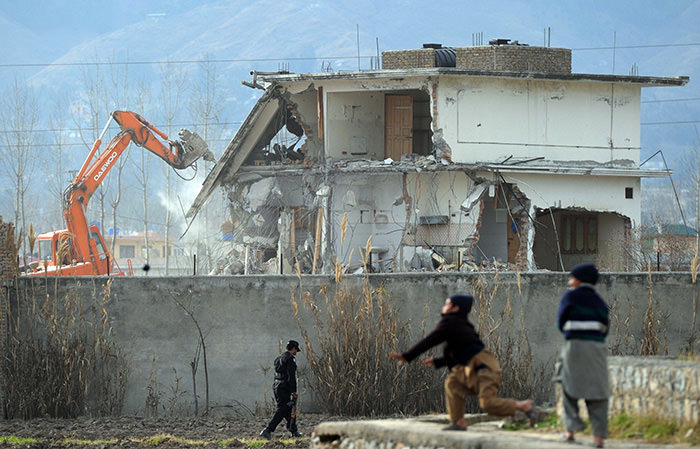 young Pakistani children playing near the destruction site of what used to be the former compound of Al-Qaeda chief Osama bin Laden in the Pakistani town of Abbottabad (AFP Photo)
by May 20, 2015 12:00 am
U.S. intelligence officials on Wednesday released documents it said were recovered during the 2011 raid on the compound in Pakistan where U.S. forces killed al Qaeda leader Osama bin Laden.

The Office of the Director of National Intelligence said in a statement that the release of the documents followed a "rigorous" review by U.S. government agencies and "aligns with the president's call for increased transparency consistent with national security prerogatives."

It said the 2014 Intelligence Authorization Act required the office to conduct a review of the documents for release.

The released material included a variety of declassified documents, a list of English language books recovered from the compound and material published by other militant groups.

U.S. forces killed bin Laden, leader of the militant organization responsible for the Sept. 11, 2001, attacks on the United States in which about 3,000 people died, in a raid on a compound in Abbottabad, a Pakistani city that also was home to a Pakistani military base.

"It is in the interest of the American public for citizens, academics, journalists and historians to have the opportunity to read and understand bin Laden's documents," U.S. House of Representatives intelligence committee Chairman Devin Nunes said in a statement.

Nunes said Wednesday's release of 86 new reports, bringing the total number of declassified reports to 120, is "a step in the right direction." He added: "I look forward to the conclusion of the ongoing efforts to declassify the hundreds of remaining Abbottabad reports to meet congressional requirements."