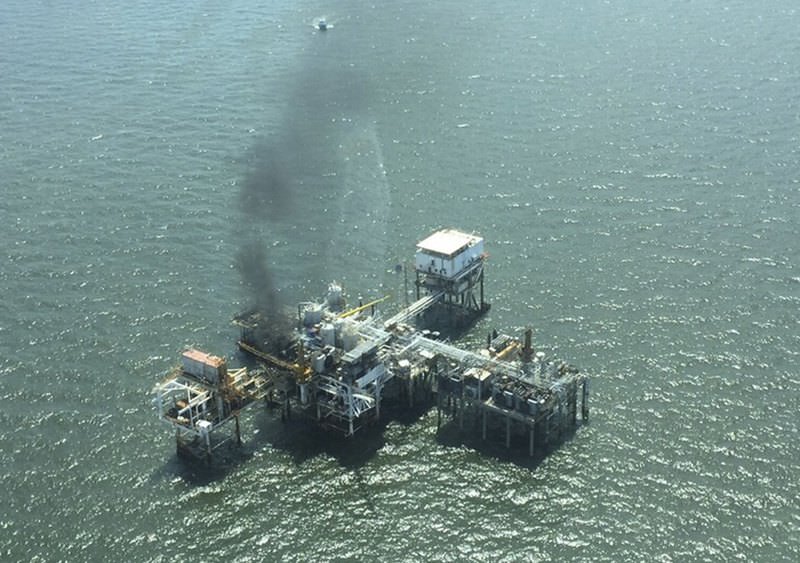 by Associated Press May 23, 2015 12:00 am
An early morning fire forced evacuation of 28 workers from an oil rig off Louisiana's coast early Friday.

The fire was still burning Friday evening, the Coast Guard and an environmentalist who flew over the site said.

No injuries were reported. Workers were evacuated by an offshore supply vessel that reported the fire at 2:50 a.m. in state waters near Breton Island off Louisiana's southeastern coast, the Coast Guard said in a news release.

Texas Petroleum Investment Co., the owner and operator of the platform, estimated that no more than 120 barrels of crude oil about 5,040 gallons were stored on the platform. Coast Guard officials later estimated the maximum potential release at 130 barrels, or 5,460 gallons. The Coast Guard had earlier worried that storage tanks on the platform were filled to their capacity of 168,000 gallons.

Authorities hoped to avoid a spill, but skimmers and oil containment boom were being dispatched to the area in case they were needed, the Coast Guard said in an afternoon news release.

Early Coast Guard reports said there was a light sheen of oil stretching for more than a mile in the area of the platform after the fire.

"There was definitely a sheen coming off of it, but I've seen a lot worse," Jonathan Henderson, an organizer with the environmental organization Gulf Restoration Network, said after a flight over the site.

"The production platform where the fire occurred gathers oil and then pumps it through a pipeline, so there is little oil stored on site and all wells feeding the platform have been shut down," David Marguiles, spokesman for Texas Petroleum Investment, said in an email.

The statement said a compressor on the platform is believed to have caught fire.