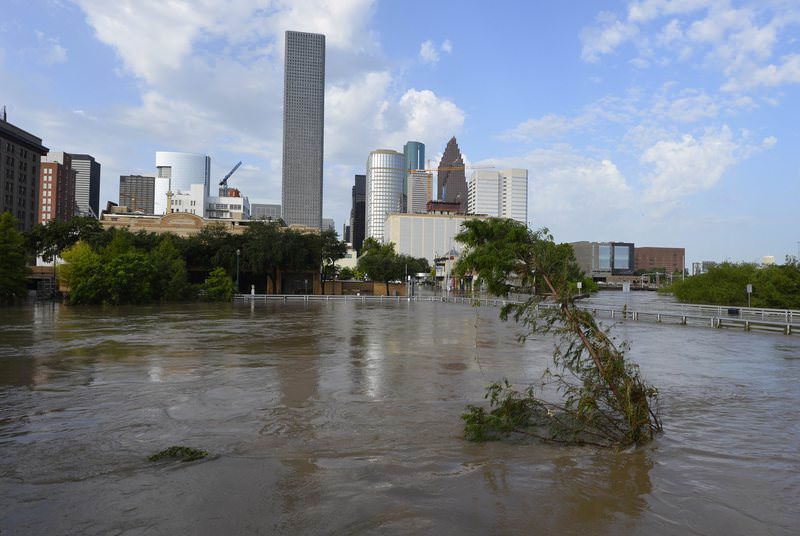 by May 26, 2015 12:00 am
Texas Governor Greg Abbott on Monday likened the ferocity of flash flooding that killed at least three people to a tsunami, and authorities said a dam had given way in a state park.

Abbott declared states of disaster in 24 counties and flew over the area south of Austin to assess the damage caused by tornadoes, heavy rainfall, thunderstorms and flooding that forced evacuations and rooftop rescues and left thousands of residents without electricity.

"This is the biggest flood this area of Texas has ever seen," Abbott said.

"It is absolutely massive - the relentless tsunami-type power of this wave of water," he said.

He described homes that were "completely wiped off the map" by the dangerous weather system that struck Texas and Oklahoma.

Authorities in Bastrop County, on the southeastern outskirts of Austin, reported in a Twitter feed that Lake Dam had failed in Bastrop State Park. They urged residents in the water's path to seek higher ground.

Accuweather.com said more rain was forecast into late Monday across the eastern half of Texas and Oklahoma, bringing flash floods, tornadoes and winds of more than 65 miles per hour (105 km per hour).

The National Weather Service reported 4.5 inches (11.5 cm) of rain fell in 90 minutes at Marquette, in central Kansas, washing out roads.

The bodies of a 14-year-old boy and his dog were found in a storm drain in the Dallas suburb of DeSoto on Monday, police said. Two other people killed in the storm were described as an unidentified man found dead in San Marcos, Texas, and a firefighter who was swept into a storm drain in Oklahoma.

The New York Times said a Tulsa, Oklahoma, woman also died on Saturday after her automobile hydroplaned on a highway.

Twelve people were listed as missing in Texas, including eight from an extended family from Corpus Christi who were vacationing in a home in Wimberley. The building was washed into the raging Blanco River, according to officials and the family's church.

Wimberley schools will be closed on Tuesday and a curfew in Wimberley and San Marcos was extended for a second night on Monday, Hays County officials said.

Parts of the area have received more than 1-1/2 feet (46 cm)of rain since May 1, six times what it typically receives in all of May, Accuweather.com said.

The governor's office said the severe weather could continue through the week.