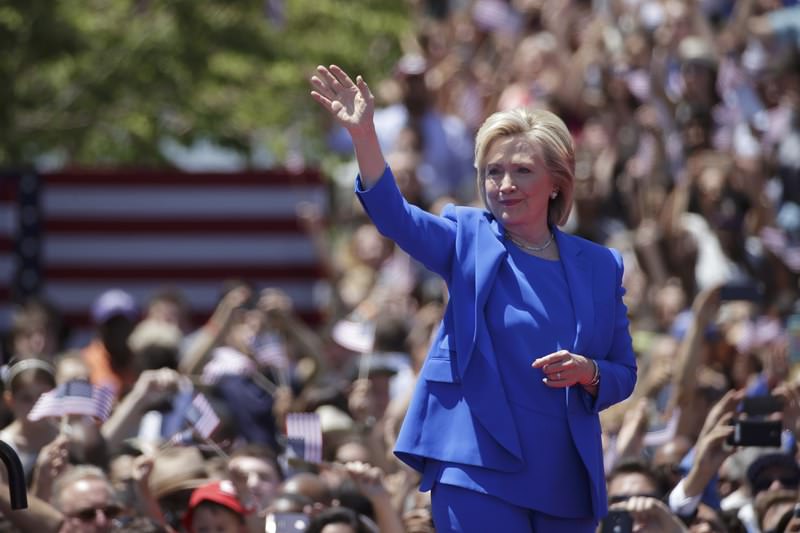 |Reuters Photo
by Jun 13, 2015 12:00 am
Former secretary of state Hillary Rodham Clinton told hundreds of supporters at her first major campaign rally in New York Saturday that she will fight to lift up the poor and middle class, who she said have been left behind as the US economy rebounds.

She said advantages have been given to the rich and corporations, resulting in record profits and record salaries for chief executives. She then addressed the crowd of thousands of her supporters by saying, "You have to wonder, 'When does my hard work pay off?' 'When does my family get ahead?'

"I say now. Prosperity can't just be for CEOs and hedge fund managers. ... America can't succeed unless you succeed. That is why I'm running for the president of the United States."

Her remarks were billed as the official launch of her campaign despite weeks already spent campaigning in the key states of Iowa and New Hampshire since she announced her bid with an online video in April. Her appearances so far had been limited to small gatherings of voters or stops at local businesses.

Crowds waving red, white and blue US flags crowded into the Franklin D Roosevelt Four Freedoms Park on New York's Roosevelt Island, chosen as a nod to a giant of Clinton's Democratic Party. Clinton served as senator from New York before President Barack Obama named her secretary of state, and her campaign headquarters is based there.

"Throughout her career, Hillary Clinton has been inspired by FDR's belief that America is stronger when we summon the work and talents of all Americans and has long admired Eleanor Roosevelt as a role model," a Clinton campaign official said last week, referring to the US president during the Great Depression and World War II and his wife.

Clinton on Saturday outlined what she said is needed for success for individuals and a country: equality in opportunity, jobs, security, "end of special privilege for the few" and a constantly rising standard of living.

"It's America's basic bargain: If you do your part, you should be able to get ahead. If everyone does their part, America gets ahead too," she said.

She emphasized she was not running to be president only for the privileged but "to make the middle class meaningful again" and "to give the poor the chance to work their way into it."

After the rally, Clinton is to travel to Iowa and will visit New Hampshire, South Carolina and Nevada next week. Those states are the first to hold contests in the state-by-state nominating process that determines each party's candidate ahead of the November 2016 general elections.

Clinton has long been considered the front runner for the Democratic Party, and several recent polls showed her with leads of more than 45 per cent over party challengers, including Vermont Senator Bernie Sanders and former Maryland governor Martin O'Malley.

Clinton has been a face on the national political stage for decades since her husband's 1992 presidential campaign as first lady and later senator and secretary of state and must battle long established perceptions.

A CNN poll released this month showed half of voters have an unfavourable opinion of Clinton, and that figure has been growing in recent months. Fifty-seven per cent believed she is not honest or trustworthy, the poll found.

To fight that perception, she talked more Saturday about her family and her own background than she did in her 2008 presidential campaign. She mentioned her grandfather who worked in a lace mill, her father who owned a small business and her mother, who was abandoned by her parents and was working as a maid by 14.

As the presidential campaigns begin to get under way in earnest, the Republican Party's field of candidates is much more crowded than the Democrats' and has no clear front runner.