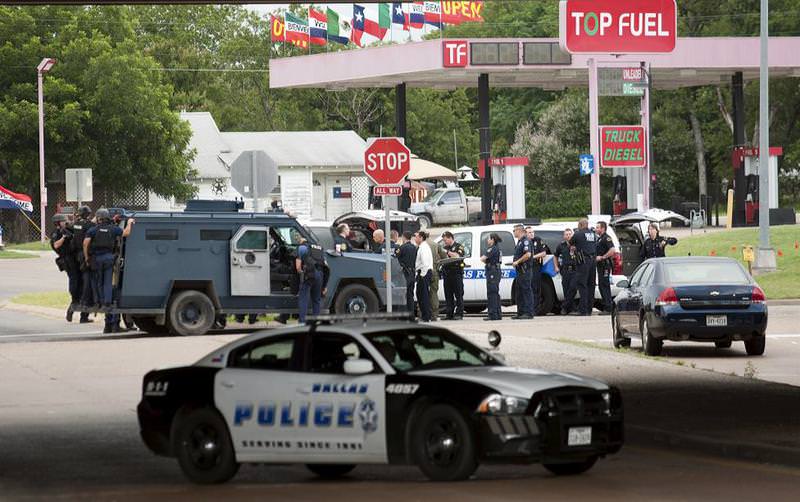 |Reuters Photo
by Jun 13, 2015 12:00 am
A man suspected of attacking Dallas Police headquarters early on Saturday, spraying it with gunfire and leaving explosive devices around the building, was shot and likely killed by snipers a few hours later, police said.

Authorities believe the attacker was acting alone, motivated by personal grievances and had no known connection to any terrorist groups, Dallas Police Chief David Brown said.

He said police snipers shot the suspect through the windshield of a van in the parking lot of a fast food restaurant about 10 miles (16 km) south of the city. A robot was checking the van for explosives.

In a Twitter feed, police said the suspect was believed to have been killed.

"There has been no contact with the suspect in over 4 hours - believe it likely that he is deceased," the police said in a tweet.

"We've opened the windshield and will utilize an explosive 'water charge' to render any explosives inside inert," the police said in a separate posting on Twitter.

They said they would not go into the vehicle until they were sure there were no explosive devices rigged to it. Small explosions were heard near the vehicle, set off by police trying to gain entry.

The hours-long ordeal began soon after midnight when the suspect riddled the headquarters of the Dallas Police Department with bullets and left behind at least two devices in duffle bags that later exploded, police said.

He then rammed a patrol car and led police on a high-speed chase. Police negotiators later engaged the suspect in sporadic dialogue that eventually petered out, prompting a move to disable the van by piercing its engine block with rifle fire.

"I believe we're blessed that our officers survived this ordeal," Brown said.

The suspect appeared to be a man who had blamed authorities for losing custody of his son, who is now in middle school, the Dallas Morning News reported.

Dallas resident Ben Sotheby, 56, watched from behind the barricades as police patrolled the area near headquarters.

"It wasn't real smart to shoot up the place where all the cops are at. You'll get yourself killed that way," he said.

No one else was believed to have been hurt in the attack which happened at around 12:30 a.m. (2.30 a.m. EDT) after police responded to reports of automatic gunfire from what was described as an armored van outside their headquarters.

At the incident unfolded, two devices exploded outside the police headquarters. The first was a pipe bomb that went off when a police robot attempted to move it. A second device, placed under a police vehicle, was detonated by a bomb squad.

Brown said police negotiators had spoken with someone inside the van, who identified himself as James Boulware. A check of public records shows that Boulware has faced several criminal charges including assault on family members.

Dallas police said they were coordinating with the bomb squad in Mesquite, a suburb where the suspect had his last known residence.

The Harris County Sheriff's Office, which serves the Houston area, said it was stepping up its security because of the incident in Dallas.