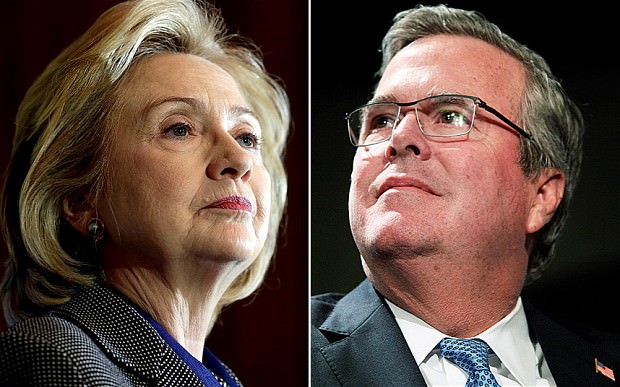 The former Florida Governor filed paperwork with the Federal Election Commission to run for the 2016 Republican presidential nomination.

Bush, 62, the son and brother of former U.S. presidents, was scheduled to make a formal announcement later in the day in Miami. He is one of the ten Republicans who have announced their intention to run.

"We will take command of our future once again in this country, I will take nothing and no one for granted. I will run with heart. I will run to win," he said in excerpts of his speech.

As the former Secretary of State, Hillary Clinton had also announced her candidacy in April, a new Clinton-Bush rivalry is expected in the 2016 presidential run.

"Bush-Clinton era" in the United States' federal and presidential political history covers the Presidencies of Ronald Reagan, George H. W. Bush, Bill Clinton, George W. Bush and Barack Obama (first term only). The Bush-Clinton era began in 1979 when Bill Clinton became Governor of Arkansas. It continued with George H. W. Bush's election as Vice President of the United States in 1980, and with his election as President in 1988 and his candidacy for re-election in 1992.

The Bush–Clinton era further expanded with Bill Clinton's and George W. Bush's two terms each from 1993 to 2009. The term is frequently used to discuss the interconnected dynastic success of these two families over the course of over thirty years.