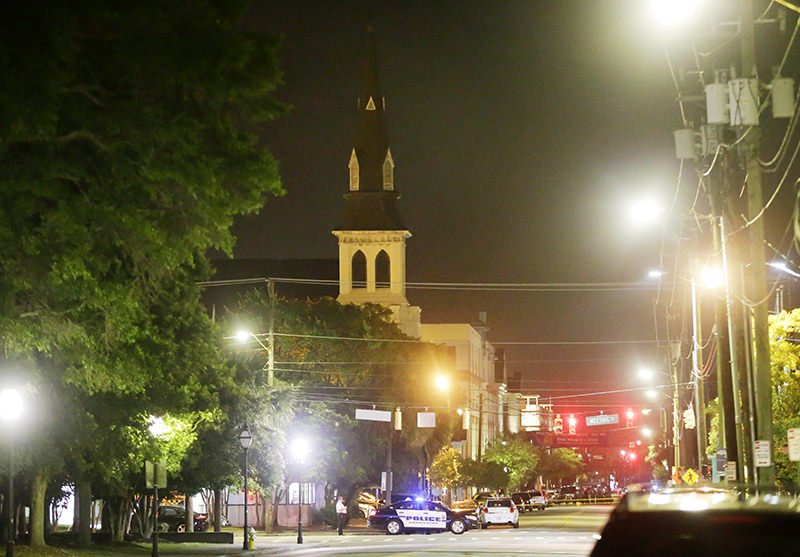 The steeple of Emanuel AME Church is visible as police close off a section of Calhoun Street early Thursday, June 18, 2015 following a shooting Wednesday night in Charleston, S.C. (AP Photo)
by Jun 18, 2015 12:00 am
A white gunman killed nine people at a historic African-American church in Charleston, South Carolina, the city's police chief said on Thursday, describing the attack as a "hate crime".

The suspect, who has been identified as Dylann Storm Roof, 21,was still at large hours after the shooting on Wednesday evening.

Eight victims were found dead in the church, Chief Gregory Mullen told reporters at a media conference, and a ninth person died after being taken to a hospital. One other person was wounded and receiving treatment.

Mullen said: "It is unfathomable that somebody in today's society would walk into a church when people are having a prayer meeting and take their lives."

None of the victims were immediately identified. But the Reverend Al Sharpton, the New York-based civil rights leader, said in a Tweet that the Reverend Clementa Pinckney, the church's pastor and a member of the state Senate, was among the fatalities.

The shooting occurred at the Emanuel AME Church in the historic centre of downtown Charleston around 9 p.m. (0100 GMT), according to Charleston Police Department spokesman Charles Francis.

After the shooting, a bomb threat was reported near the church, Charleston County Sheriff's Office spokesman Eric Watson said, and people who were gathered in the area were told by police to move back.

Chief Mullen told the press conference that the all-clear had been given after checks following the bomb threat.

A police chaplain was present at the scene of the shooting, and a helicopter with a searchlight hovered overhead as officers combed through the area.

Several men stood in a circle in front of a hotel near the church.

"We pray for the families, they've got a long road ahead of them," Reverend James Johnson, a local civil rights activist, said during the impromptu prayer service.

Following the attack on the church, Republican presidential candidate Jeb Bush, the former governor of Florida, canceled an appearance in Charleston that had been scheduled for Thursday morning.

"Governor Bush's thoughts and prayers are with the individuals and families affected by this tragedy," his campaign team said in a statement.

Local broadcaster WCSC reported the FBI was on the scene. The FBI could not be reached immediately for comment.

The website for the church said it has one of the largest and oldest black congregations in the South. It has its roots in the early 19th century, and the current building was built in 1891. It is considered a historically significant building, according to the National Park Service.