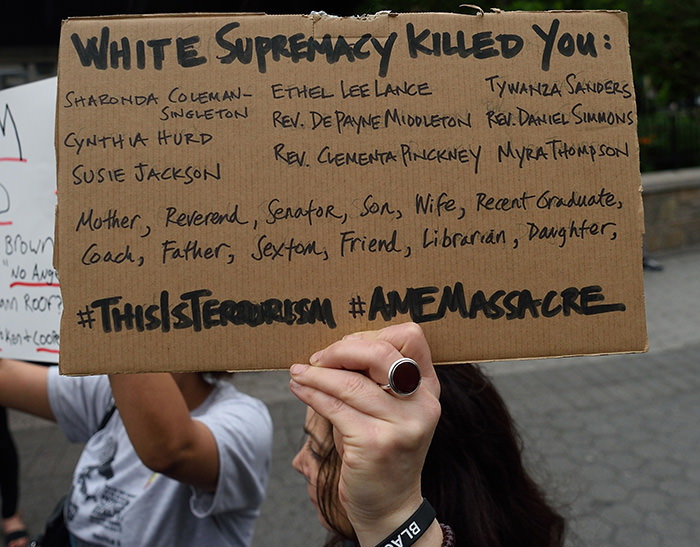 Mourners gather in Union Square Park June 18, 2015 in New York in to remember those killed at a prayer meeting in Charleston, South Carolina (AFP Photo)
by Daily Sabah with Reuters Jun 19, 2015 12:00 am
Dylann Roof, the 21-year-old white man accused of shooting dead nine people in a rampage at a historic black South Carolina church, has confessed to carrying out the attack, with an intention of sparking new racial confrontations, CNN reported on Friday, citing unnamed law enforcement officials.

Roof is due to face a bail hearing later on Friday, where he will appear by video link from the Charleston-area detention center, to which he was brought by police following his arrest in North Carolina, 220 miles north of the nearly 200-year-old Emanuel African Methodist Episcopal Church.

U.S. officials are investigating Roof's attack, in which four ministers were killed including a Democratic state senator, as a hate crime. It comes in a year of turmoil in the United States, where police killings of several unarmed black men has provoked angry national debates about race relations, policing and the criminal justice system.

Roof had intended to set off new racial confrontations with his attack, CNN reported, citing a law enforcement source. The report could not be immediately confirmed.

South Carolina Governor Nikki Haley told NBC's "Today" show on Friday that she would prefer to see Roof tried on state charges and that she believed state prosecutors should pursue a death sentence.

The United States has recently been shaken by nationwide protests against police brutality and systemic injustice towards the African-American citizens.

The recent nationwide uprisings by the African-American communities, which took place in Ferguson, Missouri over the death of Michael Brown, 18, who was fatally shot by a police officer in August 2014, and in Baltimore in the wake of peaceful demonstrations over the death of Freddie Gray, 25, on April 19, questions have been raised regarding the existence of systemic injustice leading to racial discrimination against people of color in the United States.

Such incidents, combined with the recent shooting in Charleston has raised new concerns over potential for racial confrontations, which could disrupt the American society.
Last Update: Jun 19, 2015 4:04 pm
RELATED TOPICS