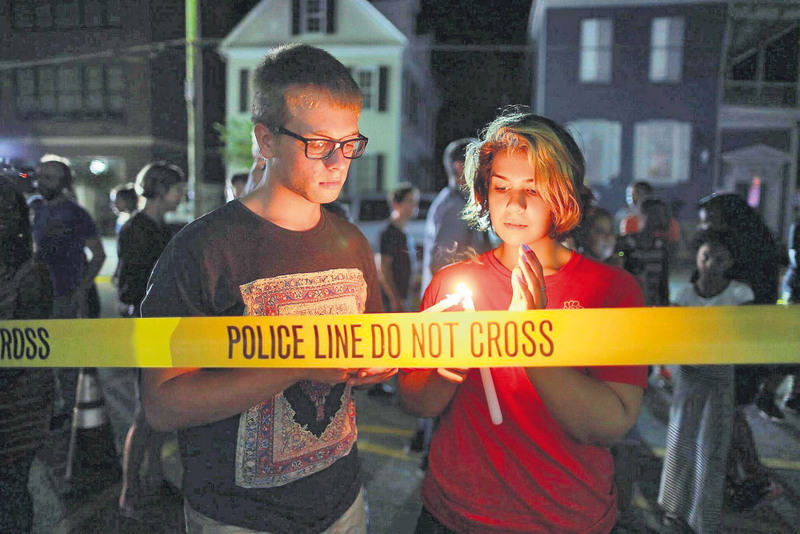 Mourners light candles for the nine victims of the shooting at the historic Emanuel African Methodist Episcopal Church in Charleston, South Carolina, on June 18.
by Lila Hassan Jun 19, 2015 12:00 am

A white gunman identified as Dylann Roof opened fire on members of a bible study group at a historically black church killing nine people. He was arrested for the massacre that authorities have said was motivated by racial hatred

On Wednesday night in Charleston, South Carolina, a white male 21-year-old Dylan Roof, is believed to have opened fire on the nearly 200-year-old Emmanuel African Methodist Episcopal Church, a historical black church very close to the center of Charleston's tourist district. The mass shooting killed nine African-American attendees. Four pastors, including Democratic state Senator Clementa Pickney, were among the six women and three men killed. Eight died at the scene while the ninth died from sustained injuries after being taken to a hospital.

Roof attended the bible study session and allegedly prayed with the victims for over an hour before he opened fire on them, according to a Snapchat video received by CNN.

The suspect was arrested in North Carolina on Thursday after florist Debbie Dills saw a black Hyundai with a South Carolina license plate and a confederate flag, which is often associated with white supremacy and racism. "There was just something inside of me that said it just didn't look right to me," she said.

She followed him in her car until she pulled up alongside him and recognized his haircut and then proceeded to call her boss, Todd Frady, who then called the King Mountain Police to inform them of their whereabouts and provide Roof's license plate number. By the time he was arrested he was already more than 240 miles away from Charleston.

The mass shooting comes after a year of turmoil consisting of protests and debates surrounding race relations, law enforcement, criminal justice and gun control as well as other racially charged attacks and shootings in the United States.

Racial tensions are high in South Carolina, as two months ago, Walter Scott, an unarmed black man, was shot in the back and killed by a white police officer in Northern Charleston. Senator Pickney, one of those killed in the shootings, had helped lead a vigil for Scott's death.

Roof, whose social media profiles reveal a trend of white supremacy, is being identified by various media reports as a committed racist.

Joseph Meek Jr., a childhood friend of Roof's, said that during a recent meeting, Roof told him that "blacks were taking over the world [and] someone needed to do something about it for the white race," he told the Associated Press. Roof's Facebook profile picture, which has circulated widely, shows him sporting the apartheid-era South African and Rhodesian flags.

Charleston Police Chief Greg Mullen said he believed the shooting was a "hate crime," adding: "This is a tragedy that no community should have to experience. ... It is senseless, unfathomable."

President of the National Association for the Advancement of Colored People (NAACP), Cornell William Brooks, was "outraged" to come across another mass hate crime after it was founded 106 years ago to fight these very crimes.

In a statement, he said: "The senselessly slain parishioners were in a church for Wednesday night bible study. There is no greater coward than a criminal who enters a house of God and slaughters innocent people engaged in the study of scripture."

U.S. President Barack Obama offered a statement Thursday saying that he felt sadness and anger at having to give another statement surrounding gun abuse and hate crimes. "I've had to make statements like these too many times," he said.

"Once again, innocent people were killed in part because someone who wanted to inflict harm had no trouble getting their hands on a gun. We as a country will have to reckon with the fact that this type of mass violence does not happen in other advanced countries," he added.

It is unclear how the suspect obtained the gun he used, but according to news reports, a senior law enforcement official says that Roof's father had recently bought him a .45 caliber gun for his 21st birthday in April. Roof's uncle also confirmed this.

Outrage on social media and popular entertainment shows have shown frustration by the mass shooting not being labeled by media outlets as a terrorist attack as well as authorities offering more civil treatment to Roof than African-Americans.

The Daily Show, a popular nightly political satire show hosted by Jon Stewart, has won praise on Thursday night for setting aside a somber, serious moment to talk about the shooting and the reluctance to label it a domestic terrorist attack, speaking of the "disparity of response between when we think people that are foreign are going to kill us and us killing ourselves." He added: "I have nothing other than just sadness that once again we have to peer into the abyss of the depraved violence that we do to each other, and the nexus of a just gaping racial wound that will not heal but we pretend doesn't exist."

Services were held in several cities, including Miami, Detroit and Philadelphia. In New York, services and protests took place with posters including such messages as "Black Lives Matter" and "Stop killing black people."

The Emmanuel African Methodist Episcopal Church where the shooting took place is the oldest African Methodist Episcopal (AME) church in the U.S. South and is one of the largest black congregations south of Baltimore. Known as "Mother Emmanuel," it has been a site of civil rights activities for decades. Civil rights leader Martin Luther King Jr. gave a speech there in April 1962.
Last Update: Jun 19, 2015 10:32 pm
RELATED TOPICS