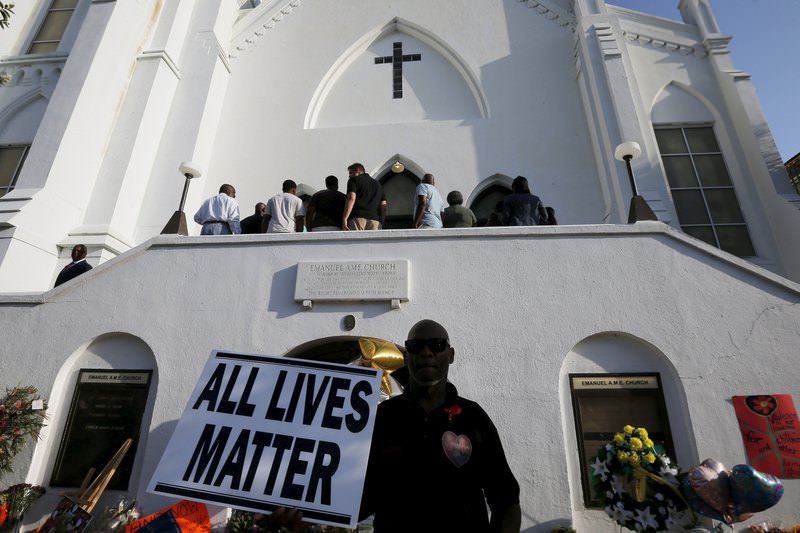 | Reuters Photo
by Daily Sabah with Agencies Jun 21, 2015 12:00 am
The Emanuel African Methodist Episcopal Church in the southern U.S. city of Charleston, South Carolina, has reopened for services on Sunday four days after a white gunman killed nine people. Hundreds of people flocked to the church in Charleston for the first service since Wednesday's killings amid tight security measures.

Outside the church, the oldest African-American congregation in the southern United States, bouquets, teddy bears and balloons covered the sidewalk while hundreds of people lined up to mourn, sing hymns and leave memorials.

Thousands of hand-written messages covered white banners at the church's entrance, reading "God Bless," or "Thank you Sen. Rev. Clementa Pinckney. You will forever be an inspiration," referring to the church's pastor, a state senator who was one of the victims.

City officials, religious leaders and mourners have said Sunday's services at Emanuel church would mark a small step toward healing after the latest U.S. mass shooting, which has again trained a spotlight on the nation's pervasive and divisive issues of race relations and gun crime.

Bells at more than a dozen churches will also ring simultaneously throughout the state of South Carolina in a sign of solidarity, the BBC reported.

Dylann Roof, the 21-year-old suspect, remains in jail charged with nine counts of murder. Authorities say he spent an hour in an evening Bible study group at the church, nicknamed "Mother Emanuel" for its key role in African-American history, before opening fire on Wednesday night.

Federal investigators were examining photos and white supremacist writings that surfaced on a website on Saturday that appeared to show Roof posing with a handgun and standing in front of a Confederate military museum and plantation slave houses.

A manifesto reportedly written by Roof said he chose to attack Charleston because it was South Carolina's most historic city and had "the highest ratio of blacks to whites in the country."

The massacre was the latest in a series of mass shootings in the United States that have reignited a debate over gun control in a country where the right to own firearms is constitutionally protected.
Last Update: Jun 21, 2015 5:31 pm
RELATED TOPICS